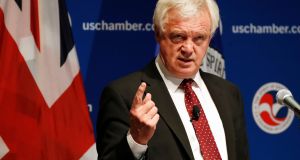 Brexit secretary David Davis told the cabinet there had been a “significant acceleration” in work to get Britain ready for its EU departure.

Preparations to leave the EU have already cost the government half a billion pounds and will lead the headcount in the British civil service to balloon by at least 8,000 workers by the end of next year, the UK government has admitted.

The Brexit secretary, David Davis, told the cabinet there had been a “significant acceleration” in work to get Britain ready for its EU departure, with 300 programmes under way across the government.

All efforts involve the government preparing for a “range of negotiated outcomes and a ‘no deal’ scenario for a policy area affected by the UK leaving the EU”, the prime minister’s spokesman said.

“The plans set out detailed delivery timelines including, for example, to recruit and train new staff, to design and procure IT systems and to deliver the necessary legislative and regulatory changes.”

He admitted that 3,000 new posts had already been created, including 300 additional lawyers, with HM Revenue and Customs confirming an additional 3,000-5,000 new workers by the end of next year.

“The chancellor and chief secretary to the Treasury then provided an update on the more than half a billion pounds that HMT has already committed for Brexit preparations, with over £250m additional funding in 2017/18,” the spokesman added.

There will also be new sub-committees within cabinet to prepare for strategic questions relating to the UK’s future relationship with the EU and to focus on domestic preparations.