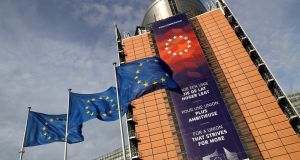 The European Commission headquarters in Brussels.

The European Commission says Ireland has made little headway in dealing with aggressive tax practices by multinationals or in broadening its tax base, but commends it for making childcare more affordable.

In its latest country report on Ireland, the EU’s executive arm said there had been “limited progress” in addressing features of the tax system here that facilitate “aggressive tax planning”.

In particular it pointed to exemptions from withholding taxes on dividend payments made by companies here to entities abroad, which in some cases, lead to those payments escaping tax altogether.

Ireland has been at the centre of the storm over multinational tax avoidance because it hosts most of the companies involved and because the Government is appealing the Commission’s €13 billion Apple tax ruling, effectively the largest tax fine in corporate history.

The Commission also claimed there had been limited progress in curbing tax expenditure and broadening the tax base, echoing similar criticism from the Government’s own spending watchdog, the Irish Fiscal Advisory Council (Ifac).

It said recent revenue-raising measures such as increases in the carbon tax and stamp duty on non-residential property were “not meaningfully contributing to broadening the tax base”.

It also claimed that the extension of certain tax credits, the expansion of the Government’s Help to Buy scheme for home buyers, and the deferral of the revaluation of the local property tax regime worked in the opposite direction.

One area where it said there had been substantial progress was in the access to affordable and quality childcare.

Overall the Commission’s report was praising of Ireland’s progress since the financial crash. “Since 2014, Ireland has made remarkable progress in strengthening its financial sector and improving employability,” it said.

The report said Ireland was experiencing “a very high rate” of economic growth for an advanced economy - 8.2 per cent in 2018 - boosted by the activities of multinationals.

While this headline rate was slowing and remained subject to a high degree of uncertainty because of Brexit and the global trade environment, the Commission said it expected growth to be in the region of 5.6 per cent last year and above 3 per cent this year.

“Ireland’s outlook depends heavily on the future relationship between the EU and UK, while risks stemming from potential changes to the international taxation environment have not abated,” it said.

The report said the UK was one of the main trading partners for Ireland and acts as a land bridge to the continent.

“Thus, depending on the final negotiations, Ireland is likely to experience disruption of its supply chains and a hit on final demand after the UK’s exit,” it said. “This negative impact might be amplified by a fall in Irish consumer and business confidence, job losses and sterling depreciation,” it said.

“In addition, a large degree of unpredictability, linked to the activities of multinationals, could drive headline growth in any direction,” it concluded.

However, it also warned that a tight labour market and diminishing spare capacity point to an economy operating at or above its potential with a significant risk of overheating.