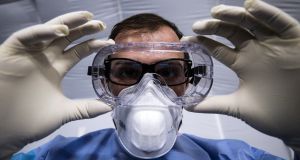 A fresh wave of selling pressure rippled across global markets on Tuesday following further evidence of the global spread of the coronavirus and warnings by Italy and Japan on the impact of the outbreak. Meanwhile Irish people are stalling on holiday bookings as coronavirus spreads to several European countries, but travel agents say they have yet to see an outbreak of panic.

Despite the growing fears over the impact of the virus, figures from the latest consumer sentiment survey shows more than one in three Irish consumers think now is a good time to buy “big ticket items”, with confidence in the economy up compared to this time last year following the UK’s orderly exit from the European Union.

In corporate news, Dalata Hotel Group is mulling expanding the business beyond Ireland and Britain.

Turbocharging supply may push first-time buyers into negative equity warns Eoin Burke-Kennedy in today’s business column. He says we have two choices to fix the housing crisis – but both are loaded with undesirable consequences.

The average weekly wage earned by workers in the final quarter of 2019 was €783.62, a 3.5 per cent rise on the same period a year earlier, according to data released by from the Central Statistics Office (CSO).

In our commercial property coverage, Ronald Quinlan has news on a ¤210 million deal for a portfolio of 368 apartments in Dun Laoghaire. He also reports on how a German investor has paid €35 million for an office block on Dublin’s Hatch Street, while a Dublin 4 guesthouse hits the market at €4 million.

Finally, a new property website solely dedicated to marketing commercial property has been set up.