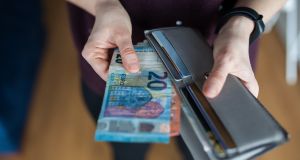 Public sector workers earned an average of €961.67 per week compared with €722.81 in the private sector in the period October-December. Photograph: iStock

The average weekly wage earned by workers in the final quarter of 2019 was €783.62, a 3.5 per cent rise on the same period a year earlier, according to data from the Central Statistics Office (CSO).

The earnings and labour costs data, released quarterly, indicates that the IT sector had the best average pay, at €1,241.42.

The lowest average weekly earnings were in the accommodation and food service sector at €381.50, although there was considerable wage inflation in that sector, with earnings up 7.5 per cent in 2019.

Across the State, average hourly earnings was €24.17, a 3.6 per cent rise on the same period in 2018, while the average weekly paid hours was down marginally to 32.4 hours.

There were 18,000 jobs vacant at the end of the three-month period.

The Nevin Economic Research Institute, a trade union-backed think tank, said the figures showed a number of welcome trends. However, the data also highlighted differences in wage growth by occupational classification, said Ciarán Nugent, an economist at the institute.

“It is clear that growth in wages since 2010 [the earliest estimates available] has been heavily skewed towards the group at the top of the income distribution,” he said, adding that average weekly earnings for managers, professionals and associated professionals increased by roughly double the amount of the other two broad groups in that period.