Bad news for the North where businesses in hospitality, manufacturing, healthcare and agrifood rely on foreign nationals 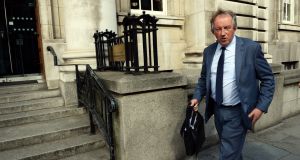 Tom Parlon: he said word of mouth from relatives of non-UK construction workers would likely alert them to potential opportunities in Ireland

The post-Brexit pulling up of the UK’s drawbridge to low-skilled workers may see opportunities for the Irish labour market given the need for more workers to ease our housing crisis.

In a not-unexpected move given Boris Johnson’s desire to force through rapid and radical changes now that the UK is out of the EU, the British government unveiled a planned overhaul of immigration law based on a new points-based system that will close the door to non-British labourer migrants.

The changes – which would mean EU migrants will be treated the same as those from the rest of the world – spell bad news for the North where businesses from hospitality to manufacturing to healthcare to agrifood rely on foreign nationals.

The North’s economy is not far off full employment in some areas and the changes could lead to staff shortages in certain sectors.

South of the Border the future closure of the UK to eastern European tradesmen and labourers could make Dublin rather than London the choice of Polish builders and Lithuanian carpenters.

Tom Parlon, director general of the Construction Industry Federation (CIF), said that two ambassadors had approached him recently asking about whether there was work in Ireland for the “very substantial numbers” of their compatriots working in the UK and wondering about the possibility of moving to Ireland.

Parlon said that word of mouth from relatives of non-UK construction workers would likely alert them to potential opportunities in Ireland in the wake of the UK’s immigration changes, though he expected major opposition from British businesses to the proposals.

“You can rest assured that if there are big Polish numbers in London, they have friends or relatives over here,” he said.

Over the last 50 or so months more than 1,000 people have been hired in a construction sector that is slowly recovering following the collapse of the property sector and the wider economy.

In the middle of last year the CIF said that 10,600 workers joined the construction workforce in 2018, up 8 per cent on the previous year, and bringing the total workforce to 145,500. At that time shortages of skilled workers were said to have driven up construction costs.

The changes across the Irish Sea could bring a timely fillip here.