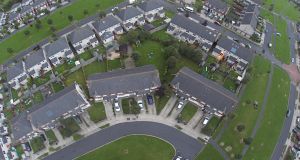 Say we agree that house prices and rents are too high, out of kilter with average incomes and a block on our progress as a society. Then we have two choices. We can, as a State, opt for wholesale intervention in the form of a major public housing build and/or a rent freeze.

Or we can chose not to intervene in the hope that incentivising the private sector to build will eventually return the market to some sort of equilibrium .

The non-intervention option, though the Government might disagree, is sort of what we’ve been getting to date, albeit with some tinkering around the edges in the form of a help-to-buy scheme and other measures.

It is also vaguely consistent with utterances from the Central Bank and Economic and Social Research Institute (ESRI), which talk of house prices being in line with “economic fundamentals”.

On the basis of Fine Gael’s recent election performance, the public has lost patience with this approach.The policy of relying almost entirely on the private sector has also singularly failed to resolve the affordability problem at the heart of the market or drive down prices in any meaningful way. The buying power of the average working family here is about €100,000 short of the median price being paid for a house in Dublin (€370,000).

The intervention option is, roughly speaking, what Sinn Féin’s pre-election manifesto promises, namely 100,000 public homes on public land over five years, a massive increase on the current build rate, and the imposition of a three-year rent freeze as opposed to controls in certain areas.

With the party winning the largest single share of the vote and an unprecedented 37 seats, one could reasonably argue there is now a popular mandate for such an approach.

But these policies have implications, some negative. Building 100,000 units in such a short space of time would have a definite impact on rents as it would take, at a stroke, thousands of State-supported HAP (housing assistance payment) tenants out of the private sector and place them in council houses.

This would create a significant vacancy in the private sector which, if not immediately filled, would exert a downward pressure on rents. Falling rents typically induce landlords, particularly smaller ones, to sell. More sellers in the market translates into weaker house prices.

Falling prices, while desirable, would place many homeowners in negative equity, particularly those that borrowed at a 90 per cent loan-to-value (LTV), in other words first-time buyers, the most vulnerable cohort of the homeowners.

Increased levels of negative equity also pose a major risk for banks as their loans are now tied to shrinking asset values.

A sudden slump in prices can also trigger a deflationary spiral with prospective buyers deferring purchases in the face of falling prices, resulting in further downward pressure on prices in a sort of negative feedback loop.

This is not to say that such an approach is undesirable, just that it has consequences, sometimes unintended.

Another possible downside to the interventionist approach is that a rent freeze, as well as inducing landlords to get out of the market, can spook would-be investors.

Ires Reit, the State’s largest residential landlord, admitted recently it was uncertain about whether a new government would freeze rents or further restrict landlords from increasing them. It dismissed suggestions, however, that it would halt building new apartments until it knew which parties were likely to form the next government.

“Political uncertainty around rent caps has altered the risk profile of developing new supply in Ireland, ” Davy Stockbrokers said in a recent note.

Many will feel these downsides pale in comparison to the potential upsides. In previous eras, the State used to pick up the shortfall when private sector construction softened, acting as a sort of counter-cycle stimulus, smoothing out the cycle rather than exaggerating it which we seem to have done in the recent past.

Since coming to power in 2011, the Fine Gael government has presided over the lowest social housing build in the State’s history, building just 1,300 units in its first five years in office, culminating in a record low of 75 in 2015.

While these build rates have increased, they are still modest compared to what we’ve had in the past. In 1975, for instance, local authorities built 8,794 social housing units, while the private sector built 18,098 homes.

Turbo-charging supply via the public sector is one way of delivering cheaper housing.

To avoid dragging existing homeowners into negative equity or chasing away future investment, the next government, if it chooses this option, may have to set up some sort of parallel housing market, one that doesn’t impact so directly on the private one.

This might involve different forms of ownership perhaps with the State maintaining ownership of the land in certain circumstances so as not to put the cheaper homes in direct market competition with the private sector ones. All this will need to be carefully thought out.

Providing smart solutions for ‘often misunderstood’ palliative care 05:35
Updating an outdated concept in body armour 05:10
Apple iPhone 12 Pro: Well worth the wait 05:04
Tech Tools: Pixel 4a 5G has a quicker chip and longer power 05:02
Give your home a smart makeover with some clever appliances 05:01