Inflation and Brexit worries slow down spending in North

Retail footfall in North fell by 4.3% in September as ‘consumer anxiety’ kicks in 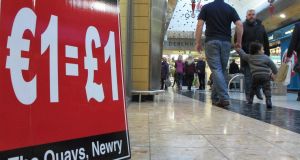 A store in Newry offers equal value to euros for its goods priced in sterling. Photograph: AP Photos/Shawn Pogatchnik

Consumers in the North are holding on to their cash and appear less willing to spend it as rising inflation, cost of living pressures and Brexit worries tighten purse strings in Northern Ireland, latest evidence suggest.

A new retail report published on Monday shows the number of people shopping on high streets and retail parks across the North fell sharply last month. According to the latest Northern Ireland Retail Consortium (NIRC) springboard footfall and vacancies monitor, footfall dropped by a further 4.3 per cent during September putting the North at the bottom of the league table for the UK.

Although there was a slight increase of 0.9 per cent in the number of people visiting shopping centres in the North last month, overall the disappointing figures are, according to Aodhán Connolly, NIRC director, a sign that the lack of a devolved political executive is continuing to impact on the local economy.

“The simple fact is that it is becoming harder and harder to get the Northern Ireland consumer to spend not only their hard-earned money, but their time in retail destinations.

“There’s an urgent need to stall the growing number of retail locations that are falling further behind the rest of the UK, by attracting shoppers to retail destinations with the right mix of products, experience and convenience,” he said.

The NIRC has previously warned that households in the North could face price increases on everyday essentials such as meat, cheese and vegetables following Brexit if the UK cannot secure long-term tariff-free trade with the EU. The retail body believes the North could be particularly hard hit because of its low levels of discretionary household income.

Latest data from the UK’s Office for National Statistics (ONS) shows that real disposable income in the North has declined with consumers perceiving that their financial situation is getting worse. According to the ONS, Northern Ireland had the lowest gross disposable household income per head compared to any other region in the UK. The UK average was estimated to be around £19,106 but in the North it was just £15,913.

It is not just large retailers that are currently feeling the pinch in the North. A fall in new car sales last month also highlights that consumer anxiety is filtering through to other sectors.

Meanwhile, Brexit worries are also intensifying among the North’s business community with the prospect of a hard Border top of its list of concerns.

A new report by the Federation of Master Builders has warned that for the local construction sector, which employs about 65,000 people, a hard Border would have an immediate and dire impact on the North’s construction sector, not least because of the amount of products and materials that local firms source, buy and import from the South.

The federation highlights that small to medium-sized construction firms, like many other businesses, are already struggling to offset problems caused by a weak pound, which is eroding profits.