Theresa May ‘slaps down’ chancellor over Brexit spending comment 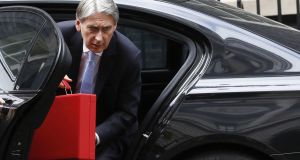 Theresa May appeared to slap down her chancellor Philip Hammond over Brexit on Wednesday after he said he would only spend money preparing for leaving the European Union without a deal “when it’s responsible to do so”.

The chancellor’s intervention angered Brexiteers, who complain that the government is not preparing adequately for the prospect of leaving the EU without a deal.

Answering questions in the House of Commons later, the prime minister reassured Iain Duncan Smith, a leading Brexiteer, that money would be allocated as soon as it was needed.

“I’m very happy to give my right honourable friend that confirmation. We are preparing for every eventuality. We are committing money to prepare for Brexit, including a no-deal scenario,” she said.

Ms May, who faced criticism on Tuesday when she was declined to say if she would vote for Brexit if a referendum was held now, ruled out any extension of article 50 talks with the EU beyond two years.

Earlier, Mr Hammond told a Commons committee that the EU should respond quickly to the prime minister’s proposal for a transition period after Britain leaves the EU. During such a period, which would last “about two years”, Britain would continue to operate as if it was part of the single market and the customs union.

Describing the transition deal as a “wasting asset”, Mr Hammond said it would become less valuable the longer the EU waited to agree to it.

“It’s self-evident to me that a transitional arrangement is a wasting asset. It has a value today; it will still have a very high value at Christmas, perhaps early in the new year, but as we move through 2018, its value to everybody will diminish significantly, and I think our European partners need to think very carefully about the need for speed,” he said.

Mr Hammond said that, although he expected the EU to agree to a transition deal, it could only be agreed in time if they started negotiations within weeks. He acknowledged that this would require the EU negotiators to break out of their agreed negotiating structure. He said that Ms May had outlined a generous offer to the EU on transition in her speech in Florence last month.

“We do expect a response from our EU partners. We have set out a fair and generous proposal to the EU. We don’t want them to immediately stand up and say, we agree to everything you’re proposing. We simply want them to say, yes, let’s sit round the table, and let’s look at the issues we will need to debate in order to get to a future partnership arrangement, via a transitional or interim period,” he said.