Chris Johns: Hard Brexit is no longer a risk – it is the UK’s objective

Should the hard Brexiteers get their wish, the first casualty will be sterling 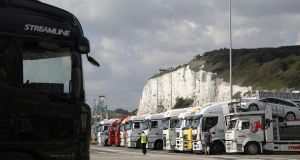 'Hard Brexit has many implications – construction companies are going to do quite well concreting over the English countryside around Dover.' Photograph: Luke MacGregor/Bloomberg

Say it often enough and people believe it: 76 per cent, according to one poll, think that a Brexit “no deal” is better than a “bad deal”. Belief in fairies and unicorns is also on the up. I’m reminded of the old story about the majority of Americans who apparently believe Elvis Presley is still alive.

Epistemology is not really my thing but I become more interested by the day in the thought processes that lead so many of us to become enchanted with fantasy. How we are gripped by various isms and ologies.

Brexit is all about tribalism: appeals to economic or financial logic are mostly beside the point. And for a significant number of Tory MPs (and a few cabinet ministers) the point is now to go over the “cliff-edge” in 2019 – or perhaps even earlier. Brexiteers sometimes coalesce around a common set of beliefs: climate change denial and support for Trump are often shared views of europhobes.

Hard Brexit is no longer a risk; it is the objective.

Some, at least, of these people are fully aware of the economic consequences of failed Brexit negotiations. We suspect that the reasons why the government refuses to release details of its estimates – so-called impact assessments – of those costs is that they are so catastrophic.

Hard Brexit has many implications, some of which are easy to spot. For example, construction companies are going to do quite well concreting over the English countryside around Dover. A huge investment is necessary in the infrastructure required for customs posts and vast lorry parks. It’s possible that there isn’t enough land available so reclamation works into the English Channel are also being muttered about.

Brexiteers berate the chancellor for not spending any taxpayer money on preparations for “no deal” – checkpoints along the English coastline are presumably what they have in mind.

A typical Brexiteer is often against government spending on anything other than prisons and the army. It’s an unusual sight to see erstwhile fiscal hawks yelling at the UK chancellor to open the purse strings. One journalist this week called for Philip Hammond to be tried for treason; others, including an ex-chancellor, have demanded he be sacked.

One prominent Tory MP insisted that the treasury be forced to raise its gloomy economic forecasts – apparently unaware that the wholly independent office for budget responsibility is now responsible for official forecasts, gloomy or otherwise.

Concrete is one thing, trade agreements are another. When the UK leaves the European Union in March 2019, prime minister Theresa May’s hope is that everything will change while everything stays the same. At least for the next couple of years.

There are so many strands to this: the list of legal and political obstacles grows daily as analysts work out what must happen if May is to stand any chance of success.

The Border is but one rather large obstacle, of course. Again, the UK’s wish is clear. It intends for the Border to remain open with no obstacles of any kind. If, after March 2019, the Irish Government co-operates with this fantasy, it will most likely end up being hauled before the European Court of Justice for failing to maintain the integrity of the EU’s customs union and single market.

Some analysts are, to their credit, trying to come up with imaginative solutions. For example, one suggestion is that Northern Ireland could contort itself into, sort of, two separate customs unions: one with the Republic, the other with Great Britain. Just how this would fly, both politically and legally, is difficult to imagine.

Quite a few people in Europe are getting rather fed up with all of this.

Forget about the economics: May’s determination to play politics with the lives of 3½ million EU citizens living in the UK is a moral disgrace.There is a growing feeling that the UK should just get on with its hard Brexit and let the rest of us get on with our lives.

It’s all very well for the UK to be consumed by Brexit; Europe has a broader and deeper agenda.

Financial markets find it very difficult to price potential catastrophe. Big political and economic disasters often don’t affect asset prices until potential becomes reality. The first World War is a favourite example: markets didn’t really move until the guns started firing even though the possibility of conflict had been talked about for years.

Brexit is a bit like this. Deadlocked negotiations may be followed by dramatic breakthrough – or not. And the clear hope is that disaster has at least been postponed until 2021 following the UK’s request for a two-year transition. Assigning probabilities – and, accordingly, asset prices – is next to impossible.

Should the hard Brexiteers get their wish, the first casualty will be sterling. The UK currency has been eerily calm through recent weeks.

The currency markets won’t price in the cliff-edge until the UK falls off it. Should that day come, the implications for exporters to the UK are dire: tariffs and customs checks are bad enough but profitability could be eviscerated by yet another collapse in the pound.