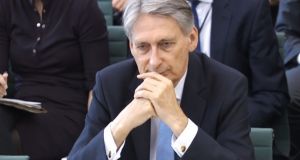 British chancellor Philip Hammond: “The enemy, the opponents, are out there on the other side of the table. Those are the people that we have to negotiate with to get the very best deal for Britain.” File photograph: PA Wire

British chancellor Philip Hammond has said he regrets his “poor choice” of words after branding the European Union the “enemy”.

Mr Hammond, who has faced a wave of criticism from some Conservatives over his gloomy approach to Brexit, admitted that “passions are high” in the party but insisted he was fully signed up to the plans for Britain’s exit and turned his fire on Brussels.

Around 30 minutes later, however, Mr Hammond rowed back from the comments and talked instead of Britain’s “friends and partners” in the EU.

He tweeted: “In an interview today I was making the point that we are united at home. I regret I used a poor choice of words.

“We will work with our friends and partners in the EU on a mutually beneficial Brexit deal #noenemieshere.”

Mr Hammond made the controversial comments during a visit to Washington, where he is attending the annual meeting of the International Monetary Fund.

“The enemy, the opponents, are out there on the other side of the table. Those are the people that we have to negotiate with to get the very best deal for Britain.”

1 More than 30 people queue overnight to secure property in Carlow
2 Coronavirus: Further 430 cases reported in State is most in a day since April
3 Man with electric scooter who died in Meath was due to get married in the coming weeks
4 Gardaí appeal for information on rape of teenager in Co Mayo playground
5 Tributes paid to musician killed by reversing van in Cork car park
Real news has value SUBSCRIBE