Budget 2018: Reading between the lines of Donohoe’s speech 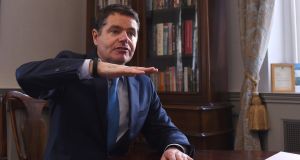 Minister for Finance Paschal Donohoe has had it up to here with Brexit already. Probably.

“I am very aware of the corrosive impact on Irish society of homelessness. I am also aware that many people living in the private rented sector wish to find more appropriate accommodation or move to their own home, but at the moment cannot do so.”

The Minister’s blissfully cough-free speech was – appropriately enough – delivered on a date that was designated both World Homeless Day and World Mental Health Day, two issues that often overlap. Donohoe characterised homelessness as the sharpest end of a spectrum of thorny housing issues, for which the most obvious solution in his mind is to increase the supply of homes. When he talks about “more appropriate accommodation” here, he means somewhere that doesn’t involve paying extortionate rents for foldaway beds in miserable, mould-infested rental properties, or indeed seeing such dismal places listed on Daft.ie and crying because you can’t afford even that.

“Our actions to support the housing sector, though, are bearing fruit. Commencement notices for new housing are up 47 per cent. Planning Permissions are up 49 per cent. And we are increasing our ambitions for what we will build directly.”

This percentage increase in residential housing commencements sounds respectable, even good, but the phrase coming from a low base – a very low base – has rarely been more apt. Department of Housing statistics show that there have been just under 12,000 housing commencements in the first eight months of the year, indicating the annual total will be about 18,000. To put this in perspective, analysts at Davy Research say the State’s true housing need between now and 2021 is “at a minimum” 35,000 units a year and is “perhaps as high” as 50,000 units a year. So it really is time to get the shovels out and build some decent places to live.

Anyone for a Diet Coke? How about a fat Sprite? (Its sugar content falls into the 5-8 grams bracket rather than higher-taxed fat Coke bracket.) Donohoe’s confirmation that a sugar tax will be implemented from April has come in a week in which US economist Richard Thaler won the Nobel prize for economics for his work on “nudge theory”, which espouses the idea that humans can be subtly guided in the direction of what’s good for them without heavy-handed interventions or compulsion. In this instance, relegating sugar-laden drinks to awkward corners of shops would constitute a “nudge”, while a sugar tax is more of a full-on shove. In a full year, it’s also expected to be a €40 million bonanza.

“In the area of corporation tax, we have seen unprecedented change and reform in recent years. Ireland has played its full part in this. We have a stable and competitive corporation tax system, which is internationally recognised as one of the most transparent in the world. Our position is clear. The 12.5 per cent tax rate is, and will remain, a core part of our offering.”

It’s more usually the likes of investment services firms and management consultancies, not countries, that have “offerings”, but then this part of Donohoe’s speech was a message direct from the headquarters of Ireland Inc. The words “our position is clear” do, of course, acknowledge that other positions are available: Brussels has long disliked the Irish 12.5 per cent rate enjoyed so much by multifarious multinationals and in the great Brexit kerfuffle, it will come under pressure again. And even if it does stay intact, the UK might well cancel out the foreign direct investment (FDI) advantage this tax rate gives Ireland by slashing its own rate to something similar post-Brexit.

“Tourism continues to be a national success story. That said, one clear impact of the UK’s decision has been a continuing weakness in the value of sterling . . . Accordingly, I have decided not to change the VAT rate on the tourism and services sector in Budget 2018. ”

The prosecco will be flowing in hotels and restaurants after the Government retained the reduced 9 per cent rate of VAT for tourism-related businesses. Although the Department of Finance had earlier advised Donohoe that the special rate, first introduced in 2011, had “done its job”, he clearly took one look at the southerly trend for visitor numbers from Britain and thought better of abolishing it. The good news for anyone who paid to read this in print is that newspapers are also subject to the reduced 9 per cent rate, while the bad news for anyone who paid to read these exact same words in a digital format is that – thanks to Europe – the VAT was 23 per cent.

“I share the Taoiseach’s view that Ireland is not a country at the edge of Europe, but at the centre of the world. That is why I am announcing increased allocations for the Department of Foreign Affairs and Trade and the Department of Defence.”

Here a beautiful picture is conjured up of the Minister and the Taoiseach engaging in heartfelt philosophical discussions about Ireland’s place in the world and coming up with the logically impossible but rhetorically strong conclusion that Ireland is the heart of everything on Earth. Pythagoras, Aristotle and Galileo would thoroughly disapprove. Donohoe was in fact referencing the “an island at the centre of the world” cover line Time magazine used on its interview with Leo Varadkar back in July, when he noted that globalism had been good to Ireland. The time has now come for a post-crisis Ireland to give back by increasing its budget for overseas development aid.

Gender-proofing budgets, or ensuring measures do not disproportionately favour or disadvantage one particular sex, has been a topic of rising profile in recent years. Research suggested Ireland’s austerity budgets had the hardest impact on single-parent households, the majority of which are headed by women. But equality remains the classic long-finger issue. While Donohoe said the Government would “provide leadership” and study best international practice in this area, it’s all a bit of a work-in-progress. A 24-page policy paper published on Tuesday suggests various Government departments will be asked to assess the impact of their policies on gender equality. What will happen if those policies fall short of ideal? The smart money is on nothing.

“This budget is important, but we cannot rest there. As we take the next step on our national journey in the face of growing external risks, especially Brexit, we must think bigger and plan for the longer term. While today I am announcing capital spending not just for next year but for the next four years, this is just the first step.”

That painful word “Brexit” popped up a total of 15 times in Donohoe’s speech, which was even more times than the words “challenge” and “opportunity”. The Minister’s announcement of a €4.3 billion capital expenditure allocation up to 2021 was, in effect, the trailer before the main feature, which will be the Government’s publication of a 10-year capital plan. Hurrah. But, frankly, with Westminster back to talking about the no-deal scenario and some economists predicting Brexit won’t actually happen, all bets are off. Donohoe claimed Budget 2018 was about making “sensible and long-term investments to benefit us now into the future”, but being sensible in a nonsensical world won’t be easy.

1 ‘They’re not making any more land, so it will be valuable’
2 Wet pub openings fuelled rise in Irish Covid infection rates – report
3 Covid-19 weighs on law firms as two in three report drop in revenue
4 Cliff Taylor: Deal or no deal we are now heading for a hard Brexit
5 Irish start-up which developed facial recognition for cows raising over $50m
6 ‘I don’t need to do any of this. . .I don’t actually need to work.’
7 How long can Government afford to keep State pension age at 66?
8 Promontoria barred from pursuing doctor over Ulster Bank loan
9 Profits jump threefold at LinkedIn’s Irish unit to $294.2m
10 Samsung Galaxy Tab S6 Lite: Lighter in price and spec, but still pulls its weight
Real news has value SUBSCRIBE