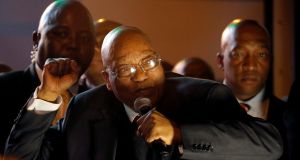 South Africa’s president, Jacob Zuma. The Gupta brothers are accused of using their relationships with Zuma and other politically-connected individuals to illegally acquire billions of rand in state contracts. Photograph: Mike Hutchings/Reuters

A far-reaching corruption scandal in South Africa that led to the collapse of UK public relations giant Bell Pottinger is now damaging the reputations of other well-known international companies operating there.

Accountants KPMG and consultants McKinsey are the latest high-profile firms being connected to allegations of dodgy deals and questionable business practices conducted by companies owned by, or linked to, South Africa-based businessmen Atul, Ajay and Rajesh Gupta.

Their South African operations are accused of facilitating or turning a blind eye to a range of allegedly unethical and illegal activities. As a result, they are now subject to a number of investigations that seek to get to the bottom of the allegations.

The Gupta brothers and their cronies are accused of using their relationships with South Africa’s president, Jacob Zuma, and other politically-connected individuals to illegally acquire billions of rand in government and state-run enterprise contracts.

Both parties deny any wrongdoing and maintain they are victims of a politically-motivated witch-hunt linked to internal power struggles in the ruling African National Congress party. None of the men has been charged with a crime related to these allegations to date.

However, the Guptas were accused by South Africa’s former corruption watchdog, public protector Thuli Madonsela, of unduly influencing the awarding of state contracts in an investigation released in November 2016 that also implicated government ministers.

Bell Pottinger was the first international company to fall foul of its association with the Guptas because of work it did for their company, Oakbay Capital, which involved manipulating the narrative around the corruption allegations engulfing the businessmen.

Early in September, the UK’s Public Relations and Communications Association delivered its harshest penalty, banning the firm for a minimum of five years for campaigns it orchestrated on their behalf around “economic apartheid” that fanned racial tensions.

The work done crafted a narrative that portrayed the Guptas as victims of white-owned multinational businesses intent on dominating different sectors. The PR firm subsequently lost many of its clients and went into administration.

However, since then, the conduct of KPMG South Africa has also come under scrutiny because of a massive leak of email correspondences from Gupta-owned companies that implicated the auditors in wrongdoing.

KPMG International forced its South African operation’s top management team to resign after it emerged the auditors allowed the Guptas to write off 30 million rand (€1.9 million) in wedding costs as business expenses.

The company also wrote a flawed report for the South African revenue authority that was used to support a political vendetta against former South African minister for finance Pravin Gordhan.

The well-respected Gordhan was axed by Zuma earlier this year in dubious circumstances. Although the KPMG report was not used as a reason to justify his sacking, the company has subsequently retracted the report and its findings.

KPMG has admitted that its actions have damaged South Africa and is conducting its own “independent” investigation into what happened in a bid to restore the public’s trust in the company.

Yet its proactive stance has not stopped some clients from abandoning the firm, citing concerns over its integrity.

The company appeared before South Africa’s parliament on October 5th to answer questions in relation to the scandal. When briefing the standing committee on public accounts, the firm’s new chief executive, Nhlamu Dlomu, said its efforts to rebuild the public’s trust in the company was “about the survival of the firm”.

Questions around McKinsey’s conduct first arose in early summer this year in the Budlender report, an investigation launched into a Gupta-linked company called Trillian and the work it did for state-run power utility Eskom.

According to local media reports, Trillian is linked to the Guptas via their associate Salim Essa who, until recently, was a majority shareholder in the company.

In the inquiry conducted by advocate Geoff Budlender that was released publicly on June 30th, McKinsey is accused of knowingly entering into a “sham” arrangement with Trillian to secure lucrative contracts with Eskom.

In 2015, Eskom appointed McKinsey to provide it with a range of advisory services valued at about a billion rand (€63 million) a year.

The report alleges McKinsey agreed to subcontract 30 per cent of its Eskom workload to Trillian under a programme established to transfer skills to small, black-owned businesses.

However, Trillian allegedly did none of that work despite being paid directly for it by Eskom, according to email leaks.

Bianca Goodson, a former Trillian chief executive turned whistleblower, has also alleged in an affidavit that the firm facilitated access to government departments and state-owned enterprises for international consultancy firms for large chunks of their fees.

Trillian has denied the allegations, as has McKinsey.

In an email to The Irish Times, McKinsey spokesman Steve John maintained the global consultants had no formal links to, nor had ever issued payments to, the Guptas or companies linked to them. He also said McKinsey stood by the quality of the work it had done for Eskom.

He added: “We are undertaking a thorough investigation on our work at Eskom since 2015. The investigation encompasses a review of contracts, invoices, payments and expenses, hundreds of thousands of documents and emails, dozens of interviews, and telephone, personal email and financial records.”

On October 4th, Eskom sent letters to both McKinsey and Trillian demanding the return of what it said were unlawful payments to the two companies in 2016 and 2017, totalling 1.028 billion rand and 564.6 million rand respectively.

Since then, McKinsey has confirmed it will pay back its Eskom fees if a court finds the state utility acted unlawfully.

However, paying back the money is not enough for South Africans suspicious that international firms are involved in the looting of the state.

Speaking to The Irish Times, executive director David Lewis of Corruption Watch said the not-for-profit organisation was preparing an evidence dossier on the scandal that it will submit to US authorities shortly.

“We are currently dealing with lawyers in the US about our submissions‚ which will include the [Budlender] report and whistleblowers’ information.

“We believe that McKinsey has paid multimillion [rand] bribes to secure their Eskom contracts, and we believe that contravenes the US Foreign Corruption Practices Act. The US justice department has the powers to investigate these contraventions.”