EU Commission pushes ahead with plan to end unanimity on tax 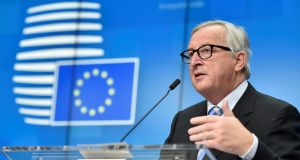 The European Commission is pressing ahead with developing a plan to end national vetoes in some decisions on tax policy, a move which the Republic is likely to strongly oppose.

The commission is asking for responses to a consultation on the idea by the middle of this month and hopes to produce a plan of action in the first quarter.

Agreement to move forward from EU member states is unlikely ahead of next May’s European Parliament elections, but the move again underlines the sustained pressure the State is now facing on the tax issue at European level.

Just before Christmas, the European Commission quietly issued a call for comments on “how EU decision-making on certain tax issues could be streamlined by removing the need for unanimous agreement by all countries”.

Respondents have until January 17th to reply. The commission will then publish its views, intended to form part of a discussion at an EU leaders’ summit next May on the future of the union.

The ending of unanimity in any area of tax policy would itself require agreement from all countries and this is seen as most unlikely in advance of next May’s European Parliament elections and the subsequent end of the current commission’s mandate next November.

However the latest move is seen as a response by the commission to intense pressure from a number of member states, particularly France, to take more aggressive action to close off tax avoidance schemes by major multinationals.

The ending of unanimity would carry significant risks for Ireland, particularly as the EU continues to discuss plans to come forward with a common tax base for big corporations across Europe and eventually to consolidate collection of this tax. This would threaten Irish corporate tax revenues and would meet strong opposition from the Government and from businesses.

“Ireland has used tax policy as a vital tool for economic development since 1956, “ according to Ian Talbot, chief executive of Chambers Ireland. “As a small, open island at the edge of Europe it remains important that we retain some independent tools for competitiveness.”

The commission consultation, know as a roadmap, points out that tax is the only policy area where unanimity now applies in all cases.

However it says that “with today’s degree of economic and financial integration, national tax policies can have important effects on other Member States and Union policies”. Unanimity is an obstacle to both efficient decision-making on tax and the development of an EU-wide tax policy, it argues.

“EU growth and competitiveness as well as fiscal fairness have been blocked as a result.”

EU Commission president, Jean-Claude Juncker suggested the move in his state of the union speech last September. The commission argues that progress is possibly on the issue under current treaties.

Ireland’s preference is to participate in the OECD process on corporation tax – the so-called BEPS ( base erosion and profit shifting) initiative – rather than in EU moves.

According to Mr Talbot: “We should continue to be able to adapt to the developing OECD BEPS standards, an area where we have already made significant progress.”

EU countries have struggled to agree on corporate tax measures in recent years. Before Christmas they failed to agree on a temporary measure to impose a special 3 per cent digital sales tax on the major internet giants.

However this measure is still on the table and,separately, France is introducing a national tax aimed at these companies, while Austria and the UK also plan to do so. This highlights the impatience in many EU countries at the pace of progress under the OECD process.