Ires Reit is expected to finalise lettings on The Maple this month, where rents for two-beds appear to have softened 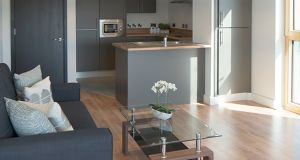 An apartment at The Maple development in Sandyford, south Dublin.

Ireland’s biggest private landlord, Ires Reit, is expected to finalise lettings of its 68-apartment scheme The Maple, in Sandyford south Dublin, by the end of the month.

The scheme was one of the priciest ever launched in the area, with apartments hitting the market at €2,570 a month in May. As a new development, consisting of four one-bed, 55 two-bed and nine three-bed apartments, the scheme is not subject to price controls.

According to Investec, the scheme is due to be fully occupied by August 25th, and has a valuation of € 27.5 million, with build costs of some € 19.6 million. The development is expected to produce annual rental income of € 1.64 million.

To help fill the new development, Ires Reit ran a special “move-in incentive”– under which people moving into the scheme in May and July were not required to pay any security deposit, only the first month’s rent. Typically the landlord, which has about 2,400 apartments across the capital, looks for a deposit of two months’ rent, although it is also currently offering deposit-free apartments at The Marker on Grand Canal Square.

Ires Reit is currently working on an appeal for its nearby site at Rockbrook, also in Sandyford, and according to Investec, the result of the appeal is expected in early September.The fund was refused planning permissions for its planned development of 465 apartments at the site in April. Ires Reit was planning to complete the development, which it had acquired from the National Asset Management Agency for € 87.5 million in 2015. If it gets the green light to develop the property, Investec says it will increae the group’s residential potfolio by about 19 per cent, “so a favourable decision would be welcome”.