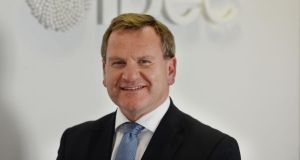 Ibec said any new SSIA-type savings scheme would have to work on a countercyclical basis. Photograph: Alan Betson

Employers’ group Ibec has called for a new SSIA-type savings scheme to allow households benefiting from economic growth to save more.

He said a revamped special savings incentive account (SSIA) could encourage savers to set aside money on a regular basis while tempering the current upswing in the economy.

The original SSIA scheme, presided over by former minister for finance Charlie McCreevy some 18 years ago, offered participants a top-up of 25 per cent on their savings over a fixed five-year term. However, it was widely criticised as it matured right in the middle of a boom, flooding an already overheating economy with more money.

Mr McCoy said any new scheme would have to work on a countercyclical basis.

“Further incentives could be built into these schemes to encourage a future staggered withdrawal of these savings or even to provide a bridge to pension provision,” he told Ibec’s annual leaders’ conference in Dublin.

“Without flexibility in monetary policy and the limited impact of fiscal policy measures in this new Irish economic model, we must be much more innovative in our policy solutions,” he said.

Central Bank governor Philip Lane is also in favour of having another SSIA scheme so the public could get in on the act of saving when times are good.

In his speech, Mr McCoy also called for a proportion of the State’s bumper corporate tax revenue to be set aside to address investment problems in housing, transport and higher education.

“We must be much more strategic and ambitious on how we manage these unexpected corporate tax revenues,” he said.

“This would ensure that if, and when, Ireland arrives at the next downturn, we have the resources already invested in critical infrastructure and productive investment even when budgetary arithmetic is difficult,” Mr McCoy said.

Ireland’s business model was undergoing profound change and it was imperative that we fully understand these changing dynamics, he said.

“If you do not understand the patient, you cannot prescribe the most effective medicine. Ireland’s business model is different and because it’s different we need new thinking in public policy to adapt to changing circumstances,” he said.