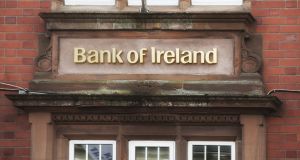 Bank of Ireland has established a €2 billion Brexit fund to support small and medium-sized businesses on both sides of the Border as the clock ticks down to the UK’s departure from the European Union.

The fund will provide loans for investment purposes, help SMEs smooth their cash flow and working capital issues, support invoice discounting, and provide guarantees to tax authorities for importers and exporters who will face having to pay customs and tariffs at the point of entry when moving goods through Britain and Ireland.

Separately, the Confederation of British Industry in Northern Ireland has warned about the impact of a no-deal Brexit on exports from the North.

Exports from the North to countries with EU free trade agreements are worth more than £1 billion every year, accounting for 12 per cent of its overseas sales.

“If the UK leaves the EU without a deal, overnight, businesses in Northern Ireland could cease to enjoy the benefits of tariff-free trade with, and easy access to, crucial markets for products and services, from Canada to South Korea, ” said Angela McGowan, director of CBI Northern Ireland.

“Many firms are unaware it is not just their relationships with EU customers at risk from a no-deal Brexit, but relationships across the globe. The risk to these deals is an overlooked danger to our economy and yet another reason why no- deal is not an option for the UK and jeopardises jobs in our communities.”

Bank of Ireland’s Brexit fund is the latest in a number of initiatives it has undertaken to support customers affected by Brexit. In January, it enlarged a foreign exchange facility from €20 million to €50 million to help them manage currency hedging. To date, €25 million of the larger fund has been accessed.

It is also an on-lender for the Strategic Banking Corporation of Ireland (SBCI), with €128 million available to it via the SBCI’s Brexit loan scheme.

“This new fund is a statement of how core the SME market is to us,” Michael Lauhoff, director of business banking at Bank of Ireland, told The Irish Times.

He said the bank was open to extending the size of the fund if the demand is greater than €2 billion. “Absolutely. There are no restrictions in place. We will see how long it takes to go through this amount.”

Bank of Ireland provided €2.4 billion in lending for SMEs in 2017, with the figure for last year due to be published on Monday as part of its full-year results.

Mr Lauhoff expects the majority of the fund will involve loans to business customers, with strong demand expected initially from customers in Border areas.

Bank of Ireland has run more than 250 events aimed at supporting SME customers in the past 18 months, and operates an online Brexit portal.