Largest rise of 10.5% recorded in administrative and support services sector 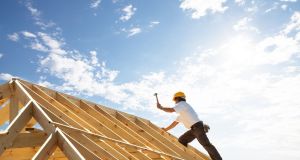 The construction industry witnessed an annual increase of 8 per cent to €810.60. Photograph: iStock

Average weekly earnings grew 4.1 per cent in 2018 to €761.65 with a significant boost seen in the administrative and support services sector, according to new figures released by the Central Statistics Office (CSO).

While all 13 sectors of the economy recorded an increase, the largest rise of 10.5 per cent was in the administrative and support services sector where average weekly earnings increased to €605.01. The transportation and storage sector recorded a 9.1 per cent rise to €852.79.

An Garda Síochána recorded the highest weekly average earnings in the public sector of €1,232.53, while regional bodies had the lowest average at €844.42.

Back in the private sector, the construction industry witnessed an annual increase of 8 per cent to €810.60 but it was the information and communication sector that had the highest average weekly earnings of €1,175.92, up 5.6 per cent on the previous year.

The CSO’s annual earnings and labour costs report provides a snapshot of income trends in the Irish economy. It shows that the job vacancy rate at the end of the fourth quarter of 2018 was 0.9 per cent.

On Monday the CSO also released statistics on industrial disputes, showing that 4,050 days were lost to disputes in 2018. That compares with 50,191 days lost in 2017, which saw the Luas drivers go on strike over pay.

In 2018, there was a total of 10 industrial disputes in progress involving 1,814 workers with one dispute in the financial, insurance and real estate sector accounting for 35.7 per cent of the days lost in 2018.