Italy fell into recession at the end of 2018 and growth of just 0.2% is expected this year 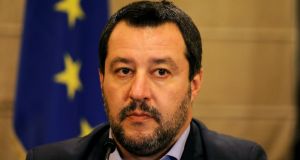 Italy’s budget does not contain measures able to boost growth and makes Rome a “risk of contagion” for the rest of the eurozone, La Repubblica newspaper said on Thursday, citing a European Commission document.

The newspaper said the commission’s country report, due to be approved on Wednesday, as saying the budget would have negative effects on economic growth, the budget deficit and debt.

“There are no measures capable of positively impacting on long-term growth,” the document said, according to the report.

Italy fell into recession at the end of 2018 and the commission has predicted growth this year of just 0.2 per cent, down from a 1.2 per cent forecast it made last November.

This unexpected slowdown could make it hard for the government to meet its deficit target of 2.04 per cent of gross domestic product this year, a hard-won compromise agreed with the Commission last year.

Deputy prime minister Matteo Salvini told Radio RAI it was too early to say if the government would have to introduce a corrective budget later this year since “the government budget’s measures need time to have (positive) effects on the economy.”

Economy minister Giovanni Tria said on Wednesday some €2 billion put aside in the 2019 budget for reserve spending should be enough to cover any shortfall.