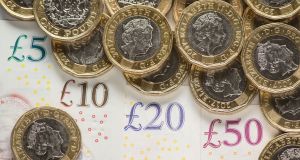 Serling’s rally is gathering pace as the prospect of a delay to Brexit grows.

Sterling climbed to a February high against the dollar and reached its strongest level against the euro in 21 months on Monday as investors continued to track the twists and turns of Westminster politics.

Reports that UK prime minister Theresa May will offer MPs the chance to extend the Brexit process beyond the March 29th deadline and the Labour party’s backing for a second referendum set a brisk pace,

London’s FTSE 100 fell 1.1 per cent as the pound’s rally hurt shares in multinationals, making their exports comparatively more expensive and increasing the costs of repatriating revenue earned abroad into sterling.

The UK’s main stock index was also hurt by big losses for two constituents. Fresnillo, the Mexican silver miner, dropped by almost 8 per cent after it issued a profit warning. News of the exclusion of International Consolidated Airlines, the owner of British Airways and Iberia, from a closely-tracked Spanish index sent its stock down by over 4 per cent.

If MPs reject a revised deal in a vote set to take place before March 12th, Mrs May will then offer a vote on whether to press ahead with a no-deal Brexit on March 29 or take a “short extension” of the Article 50 exit process, it was reported on Tuesday.

The planned offer, first reported by the Sun, comes after Jeremy Corbyn, Labour leader, on Monday announced his party will back a second referendum on Brexit.

“Further upside should be limited as there is unlikely to be a Commons majority in favour of a second referendum and Brexit delay is already baked into market expectations,” he added. – Copyright The Financial Times Limited 2019