Has Johnson opted for a ‘madman’ approach to Brexit negotiations?

The coming months promise to be rocky, and currency traders are bracing for more sterling volatility 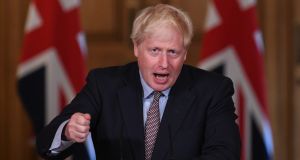 Boris Johnson is reported to have said in 2018 “if Donald Trump was negotiating Brexit, he would create chaos right at the start of negotiations”. Photograph: Stefan Rousseau/Getty Images

The Brexit negotiations are beginning to look and feel a lot like last year’s Brexit negotiations. The ones that fractured and collapsed on a daily basis, that seemed to be leading to the abyss of a no-deal every week, but somehow, at the last minute, got saved by an unlikely compromise.

An unlikely compromise that could have been forged at the outset but for the grandstanding and sabre-rattling of the current Tory administration.

A former Irish ambassador to the EU, Rory Montgomery, believes UK prime minister Boris Johnson may be adopting “a kind of Trumpian madman approach” to the current negotiations.

The “madman theory” of negotiations involves scaring an opponent into concessions by cultivating an image of recklessness. Mr Johnson was reported to have said back in 2018: “If Donald Trump was negotiating Brexit, he would create chaos right at the start of negotiations.”

For years Brexiteers have spouted guff about frictionless borders and regaining sovereignty, but the dark realities of being fully out of the EU with only limited access to the Common Market is fast approaching.

Either way, the next few months promise to be rocky, and currency traders are bracing themselves for more sterling volatility.

Sterling slipped to 91p against the euro this week, a level that really hurts exporters here, after the UK admitted its new Internal Markets Bill breaks international law by ignoring some parts of its EU divorce treaty.

And according to Justin Doyle, senior foreign exchange trader at Investec in Dublin, there may be worse to come.

“This recent ramp-up in negative Brexit chatter has seen the pound grind lower over the last few trading sessions. We will have to wait and see if Johnson’s new Brexit approach is simply political posturing but whatever it turns out to be this never-ending Brexit uncertainty is concerning to say the least.

“Throw this on top of the [probable] imminent cancellation of UK’s uber-supportive pandemic furlough programme, and the outlook for the pound in the short/medium term begins to look increasingly negative,” said Doyle.