Unemployment rate drops to 15.4% in August

Latest figures suggest as many as 359,288 are still unemployed 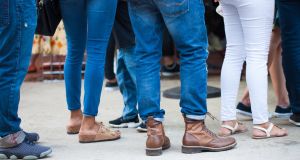 The Republic’s unemployment rate fell to 15.4 per cent in August, down from 17.6 per cent the previous month and down from a pandemic peak of 28.3 per cent in April.

The latest figures from the Central Statistics Office (CSO) are an estimate based on the Live Register and Covid-19-related claims. They indicate that as many as 359,288 people were unemployed last month.

“The Covid-19 crisis has continued to have a significant impact on the labour market in Ireland in August 2020,” the CSO said.

“ While the standard measure of Monthly Unemployment was 5.2 per ent in August 2020, a new Covid-19 adjusted measure of unemployment could indicate a rate as high as 15.4 per cent if all claimants of the Pandemic Unemployment Payment (PUP) were classified as unemployed,” it said.

Jack Kennedy from recruitment site Indeed said: “While these figures offer some welcome news, the country will be holding its breath over the coming winter to see the more permanent impact on the headline unemployment rate. Even with pubs due to reopen, it’s possible that some of those counted in the temporary Covid adjusted figure will transfer into the standard unemployment category as confirmation of job losses occur.”

“With positive cases rising, and the threat of another lockdown looming, it will be a testing time for those trying to keep businesses open and staff employed,” he said.

“The next few months will also be challenging for graduates, who are facing an entirely different job market than those who qualified just a year earlier, when the economy was nearly at full employment. As is a common theme in recessions, young people tend to be among the worst affected - youth unemployment still remains exceptionally high at 37.8 per cent on the Covid-19 adjusted measur,” he said.

1 Ryanair and Eir the worst for customer service during Covid crisis
2 What to consider if older person or loved one needs care at home
3 ‘Essential’ retailers risk a firestorm if they exploit the closure of the ‘non-essential’
4 Fair deal? Family at odds with hospital and each other not so sure
5 PlanNet21 eyes further acquisitions after buying rival eCom
6 Glenveagh attracts growing hedge-fund interest
7 Level 5 restrictions risk pushing economy into double-dip recession
8 INM inspectors write to former directors in ‘inside information’ inquiry
9 Tinnitus group Neuromod raises €10.5m for expansion
10 Streaming services set for Christmas battle after drama-filled year
Real news has value SUBSCRIBE