Cantillon: Promoters and tourist sector look to 2021 and call for refund guarantees 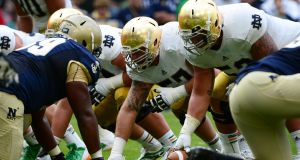 After the economy last cratered during the financial crisis a decade ago, the first green shoots of recovery for the tourism sector came in the form of a 2012 US college football game in Dublin between Navy and Notre Dame.

It brought more than 35,000 American visitors to the city, many of whom went on to holiday around the rest of Ireland. It was a godsend for cash-starved local hotels and restaurants.

Events such as these are seriously big business. Not just for tourism, but also through the dizzying carousel of spin-off corporate events and business meetings that tend to follow the pageantry of US college football games whenever they go on tour. There is a nexus between the locker room and the boardroom.

This Saturday was supposed to see the two teams from 2012 return to play in the Aviva stadium for the first of five annual Aer Lingus College Football Classics. Its promoters had estimated it would be worth €70 million to the economy. That number is hard to independently validate, but it certainly would have provided a welcome boost to the city. It was essentially a sellout.

This year’s event, however, fell victim to the pandemic. But it is still possible that next year’s game, scheduled for the same weekend in August and between Nebraska and Illinois, could go ahead if the pandemic is brought under control in Europe and the US by early next year.

It sounds like a long shot. But the promoters say they have to start planning it now on the basis that it will happen, as it will be “too late” if they wait for news of a vaccine by the end of the year. They want hoteliers and airlines to commit now to providing full refunds to US visitors if the event has to be cancelled yet again.

The Government also has a role to play. No US visitor will book a flight to Ireland for a football game if they believe there is even a chance that they might have to quarantine upon entry.

The Government should set out a medium-term plan for the easing of the travel restrictions that are currently strangling the tourism sector. Otherwise, how can anyone in the industry plan ahead for anything?