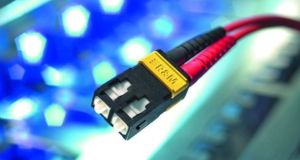 Eir’s rivals claim that because they are forced to pay wholesale rates that do not reflect current market prices, the incumbent is being given an unfair advantage

Eir might have reported a 2 per cent decline in revenues for its last financial year but this is unlikely to have upset its French owners. There is a strong likelihood, however, that the company’s rivals will once again be spitting blood over the news.

The group’s latest results published Wednesday shows the business is undoubtedly a cash cow for its owners with an €80 million dividend paid out last year, bringing total dividends paid out to €480 million over the past two years.

Its 54 per cent fixed ebitda margin is the biggest among incumbents, according to figures from Analysys Mason.

Given all of this, is it any wonder why its rivals might rage over the fact that the communications regulator, ComReg, has yet to update its pricing model that it uses to decide the wholesale rates that Eir can charge competitors to use its infrastructure?

Despite strongly worded demands from the European Commission that ComReg get a move on and take action to update pricing that is estimated to be seriously outdated, the regulator has yet to step up to the plate.

Eir’s rivals claim that because they are forced to pay wholesale rates that do not reflect current market prices, the incumbent is being given an unfair advantage. They insist that while this is damaging for them, the biggest losers from this are consumers, who are being charged more for services such as broadband than they ought to be.

Studies show that not only do Irish consumers pay more for broadband than their European counterparts but that for this they receive average speeds which are among the lowest on the continent.

To continue to do nothing to protect consumers, ComReg is repeatedly failing to uphold a central tenet of its brief.