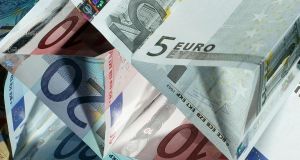 The Government is on course to run a budget surplus this year for the first time in over a decade. Photograph: Getty Images

The Government is on course to run a budget surplus this year for the first time in over a decade following a near record €2.7 billion corporation tax take in November.

Exchequer returns for the first 11 months of the year show the business tax generated half a billion euro more than expected last month and has now taken in a record €9.4 billion so far this year, 20 per cent ahead of the Government’s target. The total for 11 months is also ahead of last year’s record €8.2 billion haul.

The windfall is likely to push the Government’s finances into surplus two years earlier than expected and for the first time since 2007. The then government ran a budgetary surplus of €570 million but this morphed into a deficit of €13 billion the following year as the economy careered off the rails and the tax base shrank.

The better-than-expected exchequer numbers are also likely to increase the clamour for full pay restoration across the public sector.

However, in a presentation to be given to the Dáil’s budgetary oversight committee on Wednesday, the chairman the Irish Fiscal Advisory Council, an of independent spending watchdog, will renew his warnings about overheating in the economy and overspending by the Government, especially in the area of health.

Economist Séamus Coffey will say that the Government is using short-term and possibly transient boosts in tax revenue – such as those evident in the latest exchequer figures – to make spending commitments that will remain in place after the revenues evaporate. This is precisely the mistake that many economists believe the then Fianna Fáil-led government made in the later period of the economic boom, immediately before the economic crash.

In particular, Mr Coffey will warn about overspending in the Department of Health, which has consistently overshot budgets and required a series of unplanned cash injections.

The latest exchequer numbers show the spending over-run in health reached €688 million in November. The Government has signalled that a portion of the corporation tax windfall will be used to plug this hole.

Mr Coffey will tell TDs that “within year spending increases this year are not consistent with prudent budgetary management”.

“Taken together, the within-year increases introduced in 2018 and the larger than assumed budget package in Budget 2019 exceed the limit that the council had assessed as appropriate,” he will say.

According to KBC Bank’s chief economist Austin Hughes: “Budget 2019 envisaged a deficit of €315 million in 2018 but the November returns suggest that tax revenues will exceed budget day forecasts by upwards of €400 million. This implies a surplus is in prospect this year, two years earlier than envisaged unless a further spending over-run, which can’t entirely be ruled out by accident or design, emerges in December.”

Corporation tax receipts have doubled since 2015 amid a huge transfer of multinational assets here in the wake of a clampdown on tax avoidance internationally and increased corporate profitability generally.

“November is the largest corporation tax collection month of the year and receipts were once again very strong, reflecting, in part, higher levels of corporate profitability in the economy,” the Department of Finance said.

About 40 per cent of business tax receipts in the Republic are generated from a handful of firms, understood to include tech giants Apple, Microsoft, Dell, Google and Oracle.

The highly concentrated nature of the business tax base leaves the public finances exposed to changes in the international business environment and the Government has been warned by the Fiscal Advisory Council not to use the current boom to fund permanent spending measures.