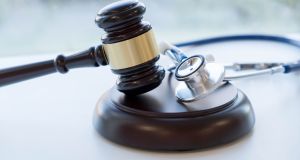 By the end of 2017 the State Claims Agency estimated that its outstanding liability was €2.7 billion, about three-quarters of which related to claims against the health system. Photograph: iStock

There has been a growing trend for people to take legal cases when problems arise in the course of medical treatment. The scale of individual awards by the Irish courts is also high, and has grown over time.

As interest rates fell to the floor, the capital sums needed to provide an income stream to fund future care have risen. By the end of 2017 the State Claims Agency estimated that its outstanding liability was €2.7 billion, about three-quarters of which related to claims against the health system.

Because claims take years to process through the courts the actual amount paid each year is much lower than the total estimated liabilities. In 2017 the total amount actually paid out by the agency was more than €170 million. The legal costs of processing the claims accounted for about a third of the actual expenditure. This is an exceptionally inefficient way for the State to transfer money to people who have adverse consequences following medical treatment.

While there have been some well-documented cases of treatment lapses, not all poor outcomes are the result of negligence – sometimes it is just down to random bad luck or the inherent risk in the procedure concerned. And this is a reason why claims made are so often contested.

The current system of redress is also seriously damaging to the health system. US research suggests that defensive medicine, in other words unnecessary tests and procedures to protect against being successfully sued, adds 5 per cent to the cost of their health system.

However, findings show this additional cost layer does not improve outcomes for patients. While we all want to see effective systems and safe practice in Irish hospitals, widespread adoption of defensive medicine would be a massive waste in an already stretched health service.

Increased litigation also has negative effects on the morale of medical and nursing staff. The threat of litigation can inhibit the open and honest look-back and discussion of what in hindsight could have been done better in different situations. That process of reflection and learning from experience is how continuous improvement is fostered.

It does seem inequitable, however, that those who can successfully prove negligence get very generous provision from state funds

Clinical staff should not only be encouraged but expected to do that, and without fear of being sued.

Almost two-thirds of health claims relate to maternity services, and the payouts on such claims are now equivalent to about 10 per cent of the maternity services budget. Because of the high rates of litigation, it is becoming harder to attract people into the practice of obstetrics.

Litigation is a poor and very expensive mechanism to drive better-quality practice in the Irish health service. Improved clinical governance, with better systems and protocols, is needed to address systems failings like the poor management of sepsis in the Halappanavar case, and the shortcomings found in Portlaoise.

The work of Hiqa and of the Medical Council are also central to driving better and safer practice. Hospital groups can drive better governance and a pooling of expertise. Mistakes are more likely to happen where doctors rarely see a specific issue. The National Cancer Strategy has demonstrated the success of centralising particular expertise in a few strategic locations.

For individuals who take claims, the process can be very stressful, it can take years, and there is no certainty about the outcome. An unsuccessful claim could mean a huge bill for legal costs, both the other side’s and those of the claimant. That stress can take its toll, and inhibit chances of rehabilitation.

On the plus side, the periodic payments legislation came into effect this October, so that successful claimants can be reasonably sure that future needs will in fact be covered, and not worry about whether inflation, investment returns, or living longer would erode their lump sum.

It does seem inequitable, however, that those who can successfully prove negligence, or whose claim is settled without admission of liability, get very generous provision from state funds, while those whose disabilities or adverse outcomes are due to chance, or who do not sue, are in a queue for public services that are less generously funded.

In the long run, it makes a lot more sense to have adequately funded state services and supports, available independently of the cause of someone’s condition. On current rates, the outstanding liabilities of the State Claims Agency will include almost €1 billion that will be spent on legal fees. That money would be far better spent on improving care supports in the state system, on a no-fault basis.