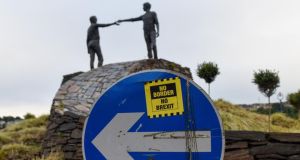 A sticker reading “No Border, No Brexit” on a road sign near the Hands Across the Divide sculpture in Derry. Photograph: Mary Turner/Bloomberg

The UK’s exit from the EU in March will put the country outside the bloc’s current VAT regime, which allows businesses to immediately reclaim the charge on goods bought from Britain and Northern Ireland.

However, once the UK leaves the EU in March, businesses in the Republic face the prospect of paying the VAT on goods imported from the UK at the point of entry while waiting up two months to reclaim the money.

Business body Ibec says that this will pressurise companies’ cash flows and could be particularly damaging for smaller businesses, many of which have not encountered the problem before.

Gerard Brady, senior economist with Ibec, pointed out yesterday that 40 per cent of consumers goods bought in the Republic come via the UK, leaving large numbers of businesses vulnerable.

“Most small and medium-sized enterprises have not dealt with this before and do not have the cash flows to cope,” he said. “You could be looking at closures.”

Mr Brady explained that businesses now get immediate credit for VAT on goods from the UK and do not have to wait up to two months to get the money back.

He noted that the charge could be up to 2 per cent of turnover for businesses that import just 10 per cent of what they sell from the UK and warned this would create difficulties for those operating on narrow margins.

Ibec has asked the Government several times to change the rules to allow businesses to effectively reclaim VAT on UK goods after Brexit.

Mr Brady said that the group sought what he called a “simple change” in the budget and pointed out that the Netherlands and Poland have already taken this step.

The Revenue Commissioners said that VAT and customs duty are paid at the point of entry on goods from non-EU countries, but is not payable until the 15th of the month following importation. Businesses can reclaim the money under the normal VAT rules.

The State’s Strategic Banking Corporation of Ireland and the European Investment Bank (EIB) are launching a new scheme for businesses investing to counteract Brexit’s impact.

EIB vice-president Andrew McDowell, says the scheme guarantees up to €300 million for small and medium-sized enterprises (SMEs) borrowing cash over eight to 10 years.

He estimated that it could release up to €450 million in total for Brexit-related investment.

Mr McDowell predicted that the food and tourism industries would feature strongly among applicants. “But all SMEs from across the economy will be eligible for this,” he says.

1 How can I view my dead brother’s will if I’m not the executor?
2 Provisional liquidator appointed to Dublin engineering firm
3 Investors pile into Irish property as turnover in build-to-rent sector reaches €2.54bn
4 Aqua Dome in Tralee could close over insurance claims, directors warn
5 Facebook faces tax court trial in US over Irish offshore deal
6 Bursting of Tesla bubble a case of ‘not if, but when’
7 Mount Charles wins €10m catering contract at Maynooth University
8 Bank of Ireland staff in line for 2.95% pay increase
9 Travel costs for IDA chief topped €45,137 last year
10 Kerry’s Chinese sales set for 30% hit from coronavirus
Real news has value SUBSCRIBE