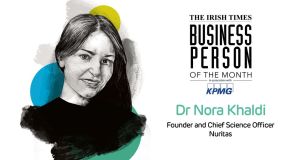 Dr Nora Khaldi founded Nuritas in 2014 and this funding makes it the first Irish biotech company to be backed by the EIB.

Dr Nora Khaldi, founder and chief science officer of Dublin biotechnology company Nuritas, has been chosen as The Irish Times Business Person of the Month for November, an award run in association with KPMG.

Nuritas last month secured €30 million from the European Investment Bank to enable it scale up the development of new therapeutics in areas such as anti-aging, anti-inflammatory and diabetes treatment. U2’s Bono and The Edge are among its backers.

The company uses big data techniques to discover peptides – molecules in food and food byproducts – that can be used by the life sciences sector in supplements and new drugs. It says it can find these peptides 10 times faster and 500 times more accurately than traditional methods.

Dr Khaldi founded the company in 2014 and this funding makes it the first Irish biotech company to be backed by the EIB. Dr Khaldi was originally a mathematician, having obtained a degree in mathematics from the Université Aix-Marseille. She went on to receive a PhD in bioinformatics and molecular evolution from Trinity College Dublin.

Nuritas employs about 50 people and has developed and patented health-improving ingredients that can address global challenges as broad as inflammation, diabetes and MRSA.

Other backers of the company include Salesforce chief executive Marc Benioff.