Brexit to hurt Irish imports from UK more than exports

Britain accounts for 24% of food, fuel and other merchandise brought into State 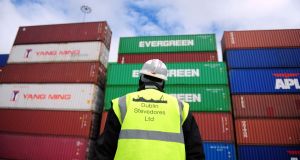 A disorderly or no-deal Brexit with the imposition of World Trade Organisation tariffs raises the prospect of sharp increases in costs for Irish importers. Photograph: Aidan Crawley/Bloomberg

The impact of Brexit on the Irish economy is likely to be more keenly felt on the import side with new figures showing the UK was Republic’s biggest import market in 2017.

The figures, published by the Central Statistics Office (CSO), show the UK accounted for 24 per cent or €19 billion worth of food, fuel and other merchandise imported into the State last year. This was nearly €3 billion more than the value of Irish exports to the UK.

Imports of food and beverages from the UK was the biggest category, accounting for €4 billion of the total, while imports of machinery and transport equipment came to €3.2 billion.

Imports of petroleum products from the UK were worth €2.7 billion, while imports of medical and pharmaceutical products were €3.1 billion.

A disorderly or no-deal Brexit with the imposition of World Trade Organisation (WTO) tariffs raises the prospect of sharp increases in costs for Irish importers.

The CSO figures confirm the findings of an earlier Department of Finance report, which pinpointed Ireland as a “substantial outlier” among EU states in terms of its exposure on imports to Brexit.

The report was commissioned last year as part of the Government’s Brexit contingency planning.

The US remains the State’s biggest export market, accounting for 27 per cent or €33 billion of the total. Medical and pharmaceutical products and organic chemicals comprised €20.5 billion, or 62 per cent of the State’s total exports to the US in 2017.

The UK market was the State’s second-largest export market and biggest EU export market, accounting for 12 per cent or €16 billion of the total.

The figures also revealed the extent of the food and drink sector’s exposure to Brexit. The State exported €12 billion of food and drink in 2017, of which €4.6 billion went to the UK.

The figures also revealed Ireland imported €7.7 billion of food and drink in 2017, which included €3.7 billion from the UK.

In contrast, the Republic ran trading deficit with the UK, importing nearly €3 billion more worth of goods than it exported.

1 How can I view my dead brother’s will if I’m not the executor?
2 Facebook faces $9 billion tax trial in US over Irish offshore deal
3 Investors pile into Irish property as turnover in build-to-rent sector reaches €2.54bn
4 Provisional liquidator appointed to Dublin engineering firm
5 Travel costs for IDA chief topped €45,137 last year
6 Kerry’s Chinese sales set for 30% hit from coronavirus
7 Legal row erupts over €85m contract
8 Bursting of Tesla bubble a case of ‘not if, but when’
9 Glencore to shake up its top tier with younger leaders
10 US reiterates opposition to Huawei equipment being used for Irish 5G
Real news has value SUBSCRIBE