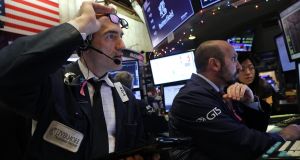 Markets tumbled after the arrest in Canada of a top executive at Chinese telecoms group Huawei fanned concern over the ability of the US and China to make their trade truce permanent.

A 2.5 per cent drop in the US S&P 500 saw the benchmark index erase its gains for the year, while the Nasdaq weakened 1.9 per cent and the Dow Jones Industrial Average shed 2.7 per cent, before closing down 0.3 per cent. The S&P and Nasdaq both ended the day down 0.4 per cent.

“The stock market is signalling a recession is on the horizon, a recession that is man-made, with two back-to-back trading days of heavy losses that has sent investors running for the exits,” said Chris Rupkey, an analyst at MUFG.

Kingspan was the worst hit of the Irish stocks yesterday, down 6.57 per cent. Heavyweights CRH, Ryanair, AIB and Bank of Ireland were also down. Only two stocks were trading positively. The Iseq Overall index has fallen almost 22 per cent so far this year.

European stock bourses in general were struggling on Thursday. The pan-continental Stoxx 600 gauge fell 3.1 per cent, bringing its fall for the year to 11.8 per cent. Meanwhile, Britain’s main stock market barometer slumped on Thursday to a two year low, down more than 3.58 per cent.

The latest sell off comes after a bruising session on Tuesday when US stocks fell more than 3 per cent as investors began to question the durability of the trade ceasefire reached by Mr Trump and Xi Jinping last weekend.

China’s government last night demanded the release of Meng Wanzhou, the daughter of Ren Zhengfei, its founder. Diplomatic and intelligence officials briefed on the case said the US was pursuing Ms Meng as part of a criminal probe related to attempts by Huawei to sell US-made equipment to Iran, a move that could be in violation of sanctions against the country.

In an angry rebuke issued on Thursday, the Chinese embassy in Ottawa accused US and Canadian authorities of having “seriously harmed the human rights” of Ms Weng, who was arrested in Vancouver.

However, Beijing has said it is implementing elements of the 90-day truce agreed with US president Donald Trump, leading some market commentators to question the extent of the stock market declines.

“The sentiment engulfing global markets today is in stark contrast to the euphoria seen after the initial announcement of a ‘trade war truce’ over the weekend,” said Cian Pierce of Bank of Ireland’s Global Markets team.

“As sentiment turns from G20 optimism toward the harsh reality of a prolonged strained relationship between the world’s two largest economies, it highlights the difficult backdrop the ECB face next week as the [quantitative easing] programme, in place since 2015, is due to come to an end.”

1 NI house builder apologises to Harry and Meghan over adverts
2 Pilita Clark: When a rude boss keeps you waiting, why not walk out?
3 Opioid executive admits to ‘no morals’ ahead of prison term
4 Comcast acquires Irish cloud-based telco Blueface
5 Are there annual limits on inheritances or gifts to a child?
6 Volvo warns of scaled back car line-up if UK splits from EU rules
7 Farmer seeks to challenge €3.6bn Intel plan in High Court
8 UK’s Henderson Park to seek €400m-plus for five prime Dubin office blocks
9 Money matters: ‘My father embarrassed us with his haggling’
10 Greencore to prove update on business after US exit
Real news has value SUBSCRIBE