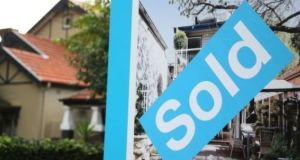 The CSO figures show that prices across the State decreased by 0.6 per cent year on year in August.

Dublin property prices fell by 1.6 per cent in the year to August as Covid-19 effectively put the brakes on the market.

The latest Residential Property Price Index from the CSO also points to a 40 per cent drop in the number of transactions in August compared with the same month last year.

The figures show prices across the State decreased by 0.6 per cent year on year in August.

The slowdown in price growth and transactions reflects the impact of the lockdown in April and May, which curbed consumer activity and construction.

The highest house price growth in Dublin was in Fingal at 1.7 per cent, while Dublin city saw a decline of 3.4 per cent.

The region outside Dublin that saw the largest rise in prices was the southwest at 5.2 per cent. At the other end of the scale, the Border region saw a 2.7 per cent decline.

The figures show there were 2,359 household dwelling purchases filed with Revenue in August. This represented a 40.2 per cent decline on the same month last year.

Existing dwellings accounted for 79 per cent of the transactions. The typical cost, or median price paid for a home in the Republic was €258,500.

“While activity has ramped up as the industry has adapted amid the pandemic, the lack of supply of properties is an issue, along with affordability and with lenders acting in a severe risk averse way,” said Pat Davitt of IPAV, the Institute of Professional Auctioneers and Valuers.

“Much will now depend on the success or otherwise of the Government’s budget measures. Supply needs to be ramped up and affordability improved,” he said.

Mr Davitt said it was disappointing that the Help-to-Buy scheme was not extended in Tuesday’s budget to include second hand homes.

Joey Sheahan, head of credit at MyMortgages.ie said the latest figures “ speak to a robust property market”, suggesting measure announced in the budget would only strengthen it.

“The extension of the Help-to-Buy was necessary and will generate even more activity in the market in the months and year ahead,” he said.

“ The announcement also brings a degree of certainty that was lacking the market – would be first-time buyers were unsure as to whether they would or could make the December deadline,” he said.