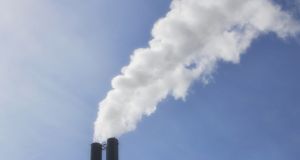 Even strong climate laws with binding targets do not do anything by themselves. Photograph: iStock

On Wednesday the three leaders of the Government coalition launched a draft climate change Bill to amend Ireland’s 2015 climate legislation. This is a landmark moment in Ireland’s approach to climate change. The Bill published this week goes a long way towards filling the gaps in the 2015 Act, but some areas could be strengthened further.

The first three, covering the periods 2021-25, 2026-30, and 2031-35, are to be set next year. The legislation also requires Government to develop a national long-term climate action strategy, and to produce an annually updated climate action plan.

Although there is an explicit target for 2050, there is in fact no clearly stated obligation on Government to comply with either the 2050 target or the carbon budgets

There will be a strengthened role for expert advice. The existing Climate Change Advisory Council will be tasked with providing advice to Government on setting carbon budgets, among other tasks. Having received advice from the Council, the Government will be tasked with setting the carbon budgets with input from the Houses of the Oireachtas. The Government is perfectly within its rights to deviate from the Council’s advice, but in that case must provide a public explanation. This gives added weight to the voice of expert advice.

To be clear, this is not “Government by experts”. In light of recent debate surrounding the role of Nphet in shaping the Government’s response to Covid-19, this strikes an appropriate balance between science-based policymaking and democratic decision-making.

The composition of the Council, currently predominantly male economists, is to be reformed to incorporate a greater diversity of expertise and gender balance. In a curious move, two of the four ex officio members of the Council (members by virtue of the fact that they head up state bodies or similar) are to be removed, but two will remain. The head of Met Éireann is to be added as a third ex officio member. The inclusion of such ex officio members makes Ireland’s climate council unique in international terms.

All of these elements represent a significant improvement on the 2015 legislation. Nonetheless, there is a striking omission in the system of targets and target-setting set out in the draft Bill. Although there is an explicit target for 2050 and an elaborate procedure for setting five-year carbon budgets, there is in fact no clearly stated obligation on Government to comply with either the 2050 target or the carbon budgets.

The state is required to “pursue the transition to a climate resilient and climate neutral economy by the end of the year 2050” but, notably, is not required to achieve it. Both the 2015 legislation and an earlier draft of the climate amendment Bill published by the outgoing Fine Gael-led government in January of this year included an obligation on the state to “pursue and achieve” the national transition objective, though the 2015 act contained a non-quantified objective.

Once emitted, greenhouse gases remain in the atmosphere for decades to centuries

Similarly, there is no clearly stated obligation on Government to comply with the carbon budgets. By contrast, the UK Climate Change Act, considered by many a leading example of this type of legislation, includes an explicit duty on the relevant secretary of state to comply with carbon budgets.

However, this problem may not be as severe as it first appears. While this week’s draft legislation lacks specific obligations to comply with either the 2050 objective or the carbon budgets, it does place clear and specific obligations on Government to produce plans and develop policy measures in a manner consistent with those targets.

Government is also required, when updating annually the Climate Action Plan, to “take account of the carbon budget programme” and to set out “sector specific actions that, in the opinion of the Government, should be pursued to remain within the carbon budget”.

In other words, Government is required to plan and develop policies in a manner consistent with the targets set out in the Bill, and can be held to account in this regard. This is a particularly important form of accountability for climate policy. Once emitted, greenhouse gases remain in the atmosphere for decades to centuries. Holding Government to account for past targets it has missed is - quite literally - too late.

The draft law would undoubtedly be strengthened by the inclusion of clear, unambiguous duties to comply with both the carbon budgets and the 2050 goal. The exclusion of such duties is puzzling. But it is important to hold Government to account as we go, and the proposed legislation provides mechanisms for doing so.

The beginning, not the end

Where they have been developed in other jurisdictions, climate laws of the type published this week provide frameworks for climate action rather than every last detail of what climate policy should be. It is no surprise that the draft law does not contain details of what the Government plans to do to reduce emissions in particular sectors.

Moreover, such laws are a beginning rather than an end. Even strong climate laws with binding targets do not do anything by themselves. The new climate Bill is one part of a much bigger jigsaw. It is an important start, but it needs to be accompanied by a wide range of other measures, including strong measures to ensure citizen participation and a just transition.

1 US election: ‘Trump would not be caught dead here unless he wanted our votes’
2 First full moon on Halloween night since 1955 will be rare ‘blue moon’
3 The real Contagion virus is out there and it’s causing virologists to worry
4 Trump vs Biden: stakes are high for the Irish economy
5 Five nursing homes receiving ‘intensive’ State support as they battle serious coronavirus outbreaks
Real news has value SUBSCRIBE