Germany’s factory orders fall at fastest pace in a decade

Manufacturing recession looks far from over in latest blow to economy 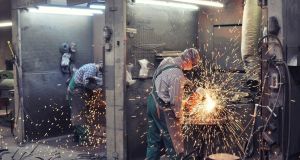 Germany’s manufacturing recession looks far from over after latest data showed factory orders falling at their fastest pace in more than a decade.

The report is a blow to Europe’s largest economy, which had shown signs of working its way out of a slump that left it with the weakest annual growth since 2013. Orders are a key gauge because they indicate future output.

While the government has raised its 2020 growth forecast to nearly twice last year’s pace on the back of a resilient labor market, the momentum remains sluggish and new risks have appeared. China’s coronavirus is disrupting global trade, the US has revived threats of tariffs on European imports, and the pressure is mounting on companies to address climate change in their business planning.

The euro gave up earlier gains after the report, and was little changed at $1.1000 at 8.25am Frankfurt time.

Labour unions are nervous about the outlook. IG Metall, Germany’s biggest union, has called on employers to refrain from cutting jobs and instead constructively work toward a strategy for future growth. While union representatives are seeking wage gains in the current bargaining round, they haven’t made specific demands.

The Economy Ministry said in the report that the outlook for industry continues to be subdued, with orders dropping 0.5 per cent in the final three months of the year. In December alone, factory orders from the euro area plunged 13.9 per cent, and investment goods slid more than 20 per cent. Domestic orders rose for a second month. – Bloomberg

10 Not everyone laughing as Leave.EU makes Waterford home