Buffett on the bottle, ‘woke’ at Lyft and windowing 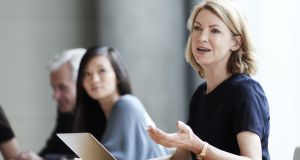 58% of junior roles are filled by women at 50 of the world’s biggest banks. Photograph: Getty

Percentage of junior roles filled by women at 50 of the world’s biggest banks, insurers, asset managers and professional services firms, according to an analysis by the Financial Times. Just over half of those companies’ total staff are female.

Percentage of senior roles at those same companies that are held by women. “No one thinks that we are done,” said Morgan Stanley’s Clare Woodman.

Number of companies that refused to disclose information about the gender breakdown of their staff to the Financial Times.

Image of the week: Buffett in Beijing

Proving it’s never too late to achieve your dreams, Warren Buffett (86) has become the face of Cherry Coke in China. His cartoon likeness now graces cans and bottles of the Coca-Cola variant, newly introduced to the Chinese market. Buffett’s investment firm Berkshire Hathaway is the biggest shareholder in Coca-Cola and Cherry Coke is apparently his favourite flavour. Coca-Cola chief executive Muhtar Kent said he couldn’t think of a better way to launch Cherry Coke than to put its “best-known fan” on the package. Berkshire Hathaway, meanwhile, has made gains of more than $15 billion over the years on its investment in the soft drinks giant. Buffett, whose personal wealth stands at about $75 billion, was not paid an appearance fee.

“Windowing” is the well-established concept in entertainment distribution, whereby the exclusive rights to a piece of content shift over the course of its “life” – for example, a film moves from the 16-week theatrical window to a spell in the pay-per-view or subscription service window, before ultimately accepting its fate as a channel schedule-filler. Headlines documenting Spotify’s new deal with music label Universal now confirm that the verb to “window” has hit the mainstream. Spotify has “agreed a deal to window” certain new-release Universal albums on its premium service, meaning that for two weeks they won’t be available to the non-paying, ad-tolerating proletariat. Spotify says this will allow subscribers to enjoy “an earlier chance to explore the complete creative work”. Translated: If you want the bragging rights, pay up.

Getting to know: John Zimmer

Not everybody is a fan of Uber. But luckily for John Zimmer (33) he’s the cofounder of Lyft, the US-based Uber rival that frankly has a much better name. His original ride-sharing company was called Zimride, though, so that was another lucky escape. Zimmer has a plan for Lyft, and that plan is to be “woke” – a black activist term that has become internet slang for being aware of and opposed to social injustice. “We’re woke. Our community is woke, and the US population is woke,” he told Time magazine. The reaction has not been kind, with many pointing out that a key Lyft backer is Peter Thiel, the “tech pal” of the distinctly unwoke Donald Trump. Zimmer, who departed former employer Lehman Brothers shortly before it went bankrupt, is undeterred. Lyft, he insists, is “a better boyfriend” than Uber. Anybody for staying single?

It wasn’t a pretty week for Imagination Technologies which saw its share price plunge more than 60 per cent after Apple said it would no longer use its graphics chip technology. There goes half your revenue stream. But which other companies are closely tied to the iPhone maker?

1. Qualcomm: Apple is currently suing chip-maker Qualcomm, so things are not exactly going swimmingly here either.

2. ARM Holdings: Japan’s SoftBank bought the British chip-maker last year for £24 billion, a price tag influenced by its status as an Apple supplier.

3. Nidec: For its sins, this Japanese company supplies key components to the Apple Watch.

4. Micron Technology: The Nasdaq-listed company’s business is in memory chips, but let’s just say it doesn’t exactly have this market to itself.

5. Samsung: One of Apple’s most important suppliers is its smartphone rival, Samsung, which makes organic light-emitting diode (OLED) display panels and memory chips for iPhones.