Euro zone flash inflation at four-year low in May

Consumer prices in the 19 countries sharing the euro declined by 0.1% in month of May 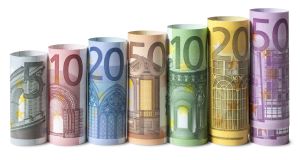 The European Union’s statistics office Eurostat said on Friday that consumer prices in the 19 countries sharing the euro declined by 0.1 per cent in May from April and increased just 0.1 per cent year-on-year after a rise of 0.3 per cent last month.

The headline inflation figure, the lowest annual level since June 2016, was in line with the average forecast of a Reuters poll of economists. It also brings price growth even further away from the European Central Bank’s target of below, but close to 2 per cent over the medium term.

Energy prices plunged 12 per cent year-on-year in May while unprocessed food prices were 6.5 per cent higher. Without these two volatile components - a measure the ECB calls core inflation and watches closely in policy decisions - prices grew 1.1 per cent in annual terms, as expected and the same increase as in April.

An even narrower inflation measure excluding also alcohol and tobacco prices that many market economists look at, was also unchanged at 0.9 per cent year-on-year in May. Economists had expected a slowdown to 0.8 per cent.