‘Nobody is losing the run of themselves’ but they see light ahead, says Bank of Ireland 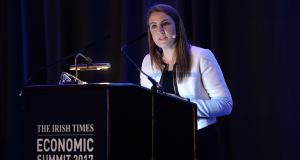 The Bank of Ireland economic pulse index recovered this month after recording its lowest ever reading in April, suggesting that consumer sentiment might have bottomed out.

Households and businesses were on edge again this month as the country remained in lockdown, but the expectations of both consumers and companies were less negative than in April.

This contributed to a stabilisation in consumer sentiment and helped lift business sentiment.

“The Covid-19 shock is still being keenly felt by consumers and businesses nationwide but May’s survey findings suggest that the sudden and severe blow to sentiment may have bottomed out,” said Bank of Ireland group chief economist Loretta O’Sullivan.

“The economic pulse was a bit firmer this month and while nobody is losing the run of themselves, people are starting to see some light at the end of the tunnel.”

The Government’s lockdown exit timetable has left households and companies optimistic that the economy can begin “the process of healing”, Dr O’Sullivan added.

However, households lowered their assessment of the current economic situation again this month and with the Covid-19 shock impacting incomes, jobs and restricting travel, seven in ten people indicated that they expect to spend less on holidays this year compared with 2019.

Households were also downbeat about the outlook for the economy, albeit less so than in April, likely reflecting the announcement of a phased easing of the public health restrictions over the summer.

The survey, conducted with 1,000 households and about 2,000 businesses by Ipsos MRBI on behalf of the bank, feeds into a Europe-wide sentiment study running since the 1960s.

1 If tourists are such pariahs should we not be testing them on arrival?
2 ‘My rent here is so low it’s a joke’
3 Belgium helps Ireland to a Brexit boon
4 Can Grafton Street stop the flood of closures?
5 What is Covid Tracker Ireland?
6 Varadkar and Donohoe to meet banks to discuss mortgage breaks
7 US court throws out $1.5bn alleged corruption case against Digicel
8 Irish Rail losses up slightly despite record passenger numbers
9 WeWork on track for profits in 2021, says chairman
10 When I’m 65: five ways you’ll benefit
Real news has value SUBSCRIBE