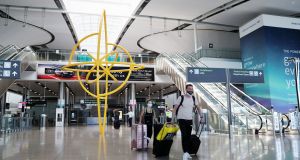 Consumers will not be comfortable taking an international flight or staying in a hotel in the coming months, according to a new survey. Photograph: Brian Lawless/PA Wire

Consumers will not be comfortable taking an international flight or staying in a hotel in the coming months, according to a new survey, as anxiety levels about finances and health increase amid the coronavirus pandemic.

Only one in five people said they would feel comfortable staying in a hotel in the next three months, while even fewer, 16 per cent, said they were likely to take an international flight.

However, 43 per cent said they would feel safe going shopping, although 39 per cent are keeping their homes stocked with more than they immediately need. Respondents said they were willing to spend more for convenience or locally-sourced products.

Discretionary spending is likely to take a hit though, with 37 per cent of consumers intending to spend more on groceries. Of those surveyed, 44 per cent said they are delaying big purchases.

“Businesses have been working on addressing the short-term and immediate impacts of the crisis, but they will now also need to evaluate how changing consumer attitudes and behaviours will impact delivery of services and how they engage with customers on a longer-term basis also,” said Harry Goddard, chief executive of Deloitte Ireland.

He said customer needs had changed and would not revert back to what they were.

“Gaining and keeping consumers’ trust will be more vital than ever now. The expectations that customers place on the companies they deal with will be heightened with regard to digital and physical safety,” he said.

“Consumer-facing organisations should start to consider what success looks like in this post-pandemic world, and work on a clear vision on how their businesses will thrive in the long term.”

Half of Irish consumers said they were concerned for their physical wellbeing, with 28 per cent reporting a rise in anxiety from the previous week.

While 64 per cent of people said they would limit their use of public transport in the next three months, 54 per cent were also planning on cutting down on their use of taxis.

“The results of the survey show that consumers are facing significant financial insecurity in the immediate term, with many worried about being able to make ends meet, [they are] reducing their discretionary spending and putting off large purchases,” said Daniel Murray, partner and head of consumer at Deloitte. “However the medium-term outlook is encouraging as we see that some are planning to resume leisure travel within the next three months.”

The Deloitte State of the Consumer Tracker is a bi-weekly a longitudinal study following the attitudes of consumers in the wake of the Covid-19 pandemic. The survey of 1,000 consumers was carried out between May 12th and 16th, just before restrictions that had been put in place to try to slow the spread of the virus began to lift.

1 Why are markets booming when a crash is on the way?
2 How much do Irish people earn? And what will Covid-19 do to our wages?
3 Drumcondra credit union collapses as merger plan fails
4 Dunnes Stores trials online ordering from Cornelscourt outlet
5 Could your old car be giving away all your secrets to its new owner?
6 British pound sinking to ‘emerging market currency’ status
7 No free lunch on coronavirus cash payments
8 Government’s budget deficit balloons to €5.3bn on back of Covid spending
9 Pfizer and BioNTech’s Covid-19 vaccine trial yields positive results
10 Aryzta needs to sell €600m of assets to reset business, shareholders claim
Real news has value SUBSCRIBE