Consumers ‘not confident’ in countries that have moved more quickly, minister says 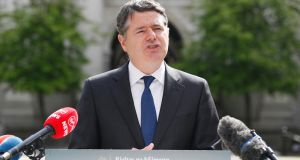 Minister for Finance Paschal Donohoe defended the slow pace of reopening the economy, saying that it will give consumers more confidence when it is complete. Photograph: Leon Farrell/Photocall Ireland.

Minister for Finance Paschal Donohoe has defended the Government’s slow reopening of the economy following the Covid-19 lockdown compared to many other countries, saying its approach will rebuild consumer confidence and fuel an economic recovery.

“There are trade-offs in terms of what you open up and when,” Mr Donohoe said in an interview with Davy executive Bernard Byrne aimed at international investors.

He added: “I believe one of the prizes we’ll be able to grab is that, The Minister reiterated the pace at which restrictions are scaled back could be changed if there is evidence that the Republic is ahead of expectations in containing the virus.

The Government’s five-phase roadmap saw the return of outdoor workers, primarily outdoor retailers and hardware stores on May 18th. The second phase, due to start on June 8th, will see marts and small retail outlets reopen.

Schools and colleges are scheduled to reopen in September and October at the beginning of the next academic year, with cafes and restaurants set for June 29th and pubs slated for August 10th.

Mr Donohoe also said in the interview, to which Davy provided a link on Thursday, that Government supports for health, income protection and businesses will see the national budget swing into a deficit of “up to €30 billion” from a once-envisaged €3 billion surplus.

The Department of Finance’s latest official forecasts, issued last month, put the expected deficit at €23 billion. That was before Mr Donohoe announced additional business supports in early May.

The Minister said that both the current government and next administration will stand ready to provide additional economic supports if needed. “My approach has been to respond back in stages to the different needs of the Irish economy,” he said.

Mr Donohoe said was “confident” that the next government will give a “commitment to regaining order in our public finances at the right point in the future”. The Irish Fiscal Advisory Council said this week that almost €11 billion of spending cuts and tax increases will be needed in the coming years to rein in the deficit.

The Minister also argued that capital spending plans should be adhered to as the economy recovers, saying that sticking to housing and infrastructure commitments would underpin employment.

On Brexit, Mr Donohoe said the direction of Britain’s divorce from the European Union will become very clear by the end of June, with a decisive UK-EU summit set to take place during the month. He said that the threat of no long-term trade deal emerging this year should be averted with “the right amount of political creativity and leadership”.

The Minister acknowledged risks to the Republic’s reliance on foreign direct investment posed by “the desires of different parts of the world to localise and nationalise” supply chains. Donald Trump has made specific reference to Ireland as he vowed in recent weeks to bring US pharmaceutical manufacturing back to the United States.

US FDI into Ireland is dominated by pharmaceutical, tech and medical devices groups.

“But as we face into that kind of risk, we’re talking about very large companies that have been in Ireland for many, many decades and that have seen other moments of challenge and have continued to say here in Ireland and invest in Ireland,” Mr Donohoe said.