Economy flying on one engine towards stormy Brexit

Cliff Taylor: No quick fix to our economic reliance on handful of big players 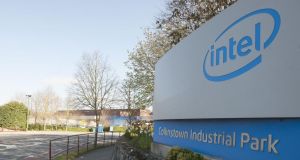 The Intel facility at Leixlip, Co Dublin. Just five big players account for 30 per cent of all of the Republic’s exports. Photograph: Dave Meehan

Ireland’s economy relies too heavily on the fortunes of a few massive players – the galacticos of the tech and pharma sectors which are driving growth, productivity and tax revenues. If these sectors, or these companies, hit any difficulties, then we are extremely vulnerable.

So warns the National Competitiveness Council (NCC),  in a new economic bulletin. The NCC chairman, UCD professor Peter Clinch, puts it succinctly. With Brexit and trade threats looming he warns that “Ireland is relying on one big engine as we fly into much stormier skies”.

The latest NCC research is notable for its blunt tone and all the more noteworthy, coming from the government's own competitiveness watchdog. It points to the existence of a kind of dual economy, split between the a handful of highly productive and profitable larger players at one end and thousands of smaller businesses, many much less productive and often relaying on one or two products and one export market.

The policy implications of this are twofold. First, Ireland is vulnerable if there are problems in the tech or pharma sectors, or in the few big firms responsible for such a large proportion of our exports and growth. Second, the Government has work to do to support the firms at the other end of the scale, who need to increase their productivity, their management skills and, ideally, grow and diversify into new markets.

The extent of our economic reliance on the big players is striking and, according to the NCC “exposes a vulnerability in the Irish economic model”. For years a key part of enterprise and tax policy has been based on attracting the big players in ICT and pharma, resulting in thousands of jobs and a significant boost to the economy. While there has been a big – and justified – focus on the money these companies move through Ireland for tax purposes, they are also major players in the real economy.

There has already been significant discussion over the past few years about the fact that just 10 companies pay almost 40 per cent of corporate tax revenues, leaving our revenues reliant on a few very big players. But the NCC analysis, published in its latest bulletin, takes the argument a few steps further, as it probes our economic reliance on the big companies.

At the other end of the scale are the 16 per cent of smaller exporters selling one product range to one market – usually the UK – and accounting for just 1.4 per cent of total exports.

It is the same story when looking at value added, the amount added to products in the supply chain in Ireland. Here statistics needs to be treated with some caution, given the tax-planning activities of many of the big players. Nonetheless, the big ICT and pharma players account for a significant amount of value added in our economy and value added in these sectors per employee (for example, €750,000-plus in the pharma sectors is a multiple of that in traditional sectors – for example, €65,000 in agriculture). The top 10 per cent of firms account for 87 per cent of value added in industry and 94 per cent in services.

The big multinational players have been responsible for the vast bulk of productivity growth in the economy in recent years, with official calculations showing that productivity in some indigenous sectors is actually falling. Further evidence of the two-tier economy.

As Clinch puts it: “Ireland’s economic performance, wages levels and general standard of living depend on a small fraction of firms, exporting a narrow range of products into a small number of markets.”

No one is naming the companies involved – the Central Statistics Office is bound by confidentiality on collecting data. But we all know the big players include ICT giants such as Facebook, Google, Intel and big pharma/biotech players, including the likes of Pfizer and MSD. Which exactly are in the top five may be the subject of speculation. But we can see the range of regulatory questions facing the big social media companies, for example, or the exposure of pharma were Donald Trump to decide to impose tariffs on the products they send to the US market.

There is no quick fix to this. Part of the policy response requires an acknowledgement of the issue, however, and the reliance of our public finances on the fortunes of these players. Beyond that there is a long slog of helping indigenous firms to grow, become more productive and export to new markets. And investing in developing infrastructure and the country’s talent base.

It is an agenda only partly reflected in our public debate, which looks to infrastructure shortfalls but fails to acknowledge the vulnerability caused by our reliance on the galacticos for exports, tax revenues and growth. In raising the flag, the NCC will have performed a service if it can succeed in getting this firmly on to the national agenda, at a time when attention usually focuses on the narrow division of budgetary spoils, driven by the usual political manoeuvres and interest groups.