Cliff Taylor: Who should Donohoe back for top ECB posts? 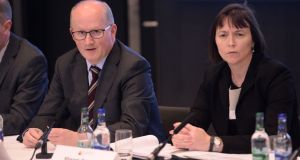 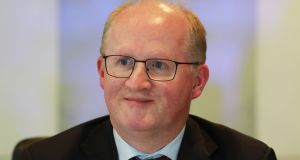 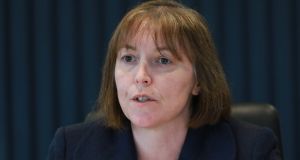 The Government is facing a tricky choice between two possible runners for top jobs in the European Central Bank system in the next year or so, with the likelihood that – at most – only one can be successful. Unlike Aidan O’Brien, who can run two horses, or more, in the one race, the Government has to put its money down one way or the other.

Having put in a decent run for the last ECB council job – when current Central Bank governor Philip Lane lost out to a Spanish candidate – the Government will know that such contests are winnable. And remember, Dublin only lost out to Paris as the new post-Brexit home for the European Banking Authority on the drawing of lots, with a similar voting base as the one which decides the ECB jobs – Europe’s finance ministers.

What we are talking about here are senior executive positions at the ECB, the summit of central banking in Europe. The next job up for grabs is the head – called the chair –of the Single Supervisory Mechanism (SSM), the body which supervises the major European banks. Unlike the other positions in play, it does not offer a seat on the ECB’s governing council. But arguably as a kind of supervisor-in-chief for Europe’s banks, it is as powerful or more so than a governing council membership. And as only the second SSM head and with big issues to face, it will be a high-profile post.

If an Irish nominee gets this job , then – as a small country – we are unlikely to also get one of the subsequent ECB council jobs, notably the chief economist position for which Lane is the early favourite. So if the Government succeeds in getting an Irish nominee to head the SSM, it would effectively “nix” Lane’s chances of the chief economist job. The Government may take the temperature on this before making a call.

And this is where it gets complicated. Sharon Donnery, one of the Central Bank’s deputy governors, would be a credible candidate for the SSM job were she to decide to put her name forward. Her current job carries responsibility for core central banking functions, she represents the bank on a special ECB body – the European Systemic Risk Board ,which is responsible for macro prudential oversight of the financial system – and has been on other high-level ECB boards. Most pertinently, she chairs the ECB body looking at the issue of non-performing loans held by Europe’s banks, one of the crunch supervisory issues for regulators.

The SSM job, unlike the other jobs on the ECB board which require a nomination by a national government, is advertised publicly. The ECB governing council decides on a preferred candidate, who must win approval from a majority of MEPs in the European Parliament and then be signed off by the European Council.

The level of lobbying required to get through this realistically requires government support – particularly as bank supervision is sensitive and the SSM has already clashed with politicians, particularly in Italy, where bad loans remain a huge issue on bank balance sheets. The process is a bit more open than that for ECB board members, divided up by euro zone finance ministers like local politicians deciding who will get to chair the council next time.That this runs directly counter to the fitness and probity rules and independent processes insisted on for people taking top jobs in commercial banks is more than a touch ironic.

Donnery – were she to go forward – would, of course, not have a clear run for such a top post and already other names are being floated, including those of several Italians. However, her qualifications are strong, she is known in Frankfurt and with the ECB – encouraged by the European Parliament – committed to getting more female candidates into top jobs, this is another point in her favour. The SSM job is the only one where the European Parliament vote is binding, though MEPs did delay an appointment previously to the ECB executive on gender balance grounds.

The key problem for the Government is timing. The SSM job has now opened up for applications, but the ECB chief economist position does not fall vacant until May of next year. There are suggestions that the Government feels it has a commitment to Lane, who would be a very strong runner for the chief economist job, though there is as yet no official comment on the matter. In turn, Donnery would likely be among the candidates if the governor job became vacant. But there would surely be others, too, and we have seen in the past how appointments to that position can be hard to predict. And if Donnery does want to go forward, is it credible not to support her?

The two positions are part of a succession of ECB posts which culminate with the ECB presidency itself next summer. In the political calculus, each post influences the one that comes after, with a divvy of spoils between northern and southern Europe, big states and small and intense manoeuvring in particular for the top job.

While the Irish Central Bank governor sits on the governing council, we have never had an executive board member. And the fact that it is our “turn”, that we have strong candidates and that we lost out so narrowly last time will all be factors in our favour. But the decision now is which candidate to back. If Donnery runs, and wins, then Lane moves from a favourite to a much longer odds bet. That may not seem fair, but it is just the politics of how this is done.