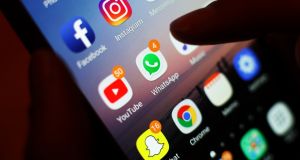 Facebook has been battling controversies involving data privacy and its use by Russians to influence the 2016 US election. Photograph: Yui Mok/PA

As much as $120 billion (€103 billion) was wiped off the value of Facebook on Thursday in the biggest one-day sell-off of a listed company in US stock market history.

The fall came a day after the company warned of slower revenue growth.

Its founder and chief executive, Mark Zuckerberg, saw his own stake in the social media giant lose as much as $16 billion over the course of the day. The technology-heavy Nasdaq index shed 1 per cent.

The US tech giant has been battling a string of controversies involving data privacy issues and the use of its platform by Russian individuals to influence the 2016 US election.

On Wednesday, it disappointed investors with its second-quarter earnings update, predicting that its revenue growth would be slower this year than last, although its advertising revenue was strongly up compared to the same period last year.

It pointed to currency fluctuations and new privacy regulations, including the EU’s General Data Protection Regulation (GDPR) that came into force this year in order to give European users more control over their data.

But the company has also faced mounting criticism in the US over its role in the interference by Russia in the US election after it emerged that Cambridge Analytica gained access to data related to 87 million Facebook profiles during the 2016 US presidential campaign.

Facebook chief executive Mark Zuckerberg has been summoned to testify to Congress and to the European Parliament this year as lawmakers on both sides of the Atlantic demand answers from the tech giant about the platform. The number of Facebook users in Europe has fallen from 282 million to 279 million the company said in its second-quarter update.

Shares fell to $175 in early trading on Thursday, valuing the company at $501 billion, a drop of $118 billion from a record high of $619 billion on Wednesday. It remained close to that level for much of the day, finishing the Wall Street session at $177.

The loss of more than $120 billion represents a drop of about a fifth of the company’s value.

But even after Thursday’s falls, Facebook remains the fifth-largest publicly traded company in the US.

Mr Zuckerberg, who founded the social network while a college student, is the company’s largest individual shareholder, holding 17 per cent of its stock.

In a conference call with investors on Wednesday, Facebook chief financial officer David Wehner said the company was investing in security and privacy which would affect growth.

Headquartered in Silicon Valley just outside San Francisco, Facebook has its European headquarters in Dublin, where it employs more than 2,000 people and has pledged to create hundreds more jobs this year.