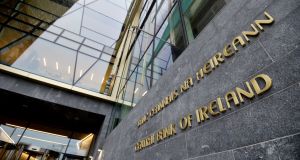 An increase in public investment in an economy close to full employment “may require counter-vailing measures to be introduced”, a Central Bank article has said. Photograph: Alan Betson/The Irish Times

The Central Bank has warned that any increase in capital spending needs to be budget neutral to avoid building up debt as this could contribute to wage and price pressures in the economy potentially eroding its competitiveness.

It also says that with the country nearing full employment, the Sate has to be wary of the dangers of overheating the economy

Capital investments will likely be stronger in the coming years than was the case for much of the 2000s, a Central Bank article states, although it warned of risks both with debt financing and financing investment through increased taxation.

In an article forming part of its quarterly bulletin, the Central Bank noted that the government’s recently announced National Development Plan (NDP) marks a sharp increase in the level of capital spend.

It’s expected that government investment will rise to €8.3 billion in 2021, representing 3.7 per cent of modified gross national income (GNI*) and €11 billion by 2027.

The €11 billion investment figure represents around 4 per cent of GNI*.

But with that increasing investment the Central Bank article highlighted challenges. For example, if the increasing output is financed by taking on additional debt the magnitude of that increase is stronger than if it was financed through taxation in the near term. That’s because higher taxes can restrain growth in consumption and private investment.

If it were financed by debt, however, that could contribute to wage and price pressures in the economy potentially eroding its competitiveness.

“While these are stylised examples, they are important in that they highlight potential risks of overheating dynamics emerging, particularly for an economy close to full employment,” the Central Bank article by Rónán Hickey, Matija Lozej and Diarmaid Smyth, said.

The piece - Irish government investment, financing and the public capital stock - argued that in both the debt financed case and investment financed through labour taxes, the investment increase leads to higher output in the longer term.

However, financing from labour taxes has the advantage of avoiding the build up of public debt.

“This highlights one key challenge that exists in framing fiscal policy at a time of strong growth; the need to increase the public capital stock, which can be expected to improve the productive capacity of the economy, while limiting the risk of costly overheating dynamics emerging,” the article noted.

Whatever model is used to finance investment, continually low spending on infrastructure have longer term growth implications. The article highlights an International Monetary Fund (IMF) conclusion from 2014 which suggests that “sharp continued cuts in public investment may need to be reversed to avoid a depletion of public capital stocks and potentially adverse effects on long term growth”.

The Central Bank article estimates that government assets increased by just 1 per cent per year between 2011 and 2017, substantially lower that the pace in the first half of the past decade. It forecasts that under current spending plans, the stock of assets will increase by roughly 16 per cent between 2017 and 2021, bringing it in line with the average growth rates experiences in the early 2000s.

In any event, with the risk of overheating a possibility, the article concludes that a substantial increase in public investment in an economy close to full employment “may require counter-vailing measures to be introduced”.