Cliff Taylor: The party’s nearly over when it comes to cheap debt 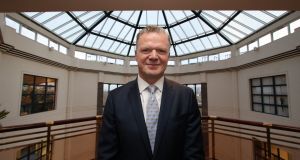 Conor O’Kelly, chief executive of the NTMA: ‘If the cycle is a 12-hour clock we are around 11 o’clock right now.’ Photograph: Iain White/Fennells

“If the cycle is a 12-hour clock we are around 11 o’clock right now.” So said Conor O’Kelly, chief executive of the NTMA this week, as he assessed the outlook for markets and interest rates, which are the key factors in managing the national debt. His point was that the extraordinary range of factors that has helped to cut the cost of servicing this debt are coming to an end. The party is nearly over.

To prepare for this, he said, investors would prefer Ireland ran a budget surplus and sold some of the remaining shares in the banks, using the cash to pay down debt. It was an unusually blunt comment from an organisation that has tended in recent years to keep a low profile.

The past few years have been dreamland for an agency raising debt. Rock bottom interest rates have helped raise new borrowings very cheaply. So far this year the NTMA has raised €11.25 billion in new debt at an interest rate of just over 1 per cent.

As well as slashing interest rates to zero, the European Central Bank has also been buying up government debt on the market, including ours, as part of its move to pump cash into the euro-zone economy. This programme is set to finish at the end of the year, removing another support for national bond markets. Central banks currently hold about a quarter of Irish bonds – taking into account ECB buying and bonds held by the Central Bank related to the Anglo and INBS wind-up. They will be sellers, not buyers, in the years ahead.

There are huge gains in trying to keep the cost of raising debt as low as possible for as long as possible as the cycle turns. Remember that as recently as 2014, official forecasts were that the interest bill on the national debt would be €10 billion this year. In the event it will be €6.1 billion, and the NTMA expects it to fall to €5 billion per annum in the next few years. Were it not for this, the postrecession hair shirt would have remained much longer on our shoulders. Spending would have been lower and taxes higher.

Now, while the game is not quite over yet, we are heading into the second period of extra time. The ECB has extended its monetary stimulus way beyond expectations, but has clearly signalled that come autumn next year, it is planning to increase short-term interest rates. Market rates will start to rise ahead of this.

We have still been borrowing and adding to our national debt in recent years. The latest NTMA figures show gross debt of €219 billion and net debt – taking account of cash balances – of €188 billion. Our national debt burden has been falling – debt has been shrinking as a percentage of GDP – but the cash value of our total debt continues to edge upwards. On current forecasts, the State is not due to move into surplus until 2020. The Government still plans to borrow in 2019.

Whatever way you slice the figures, our debt exposure is significant.Our national debt is still as large as the size of the economy’s annual ouput, measured by the new GNI* figures, which nets out multinational distortions. And the NTMA points out that relative to government revenues, our debt and interest burden is still way above the average.

We do have some buffers, notably money in the Irish Strategic Investment Fund – about €6.5 billion in liquid investments at end 2017 – some of which will move to the new rainy day fund. This is in addition to the cash held by the NTMA, now more than €20 billion. But there are other calls on this cash – paying off past debt and funding new investment – and it is a question of priorities.

As O’Kelly pointed out, the State could start to sell the remaining shares it holds in the Irish banks and use the proceeds to pay down debt. Selling all these could take some time, but perhaps there may soon be an opportune time to sell some more of the State’s stake in AIB, to help set our debt on a downward track. The State still holds 71 per cent of the bank’s shares, having launched an IPO last June to sell off the first chunk of its holding. O’Kelly’s point is that equity markets have had a really good run and that, some day, this will end and the value of these holdings could drop.

Running a budget surplus, or selling assets, are the only two ways to actually reduce the cash value of our national debt. Right now, both seem like a good idea. Doing this would provide some leeway for the exchequer if economic growth slows. It would limit our future risk, particularly if some kind of shock hits the markets.

At the moment the markets rate us as a kind of four-star investment, better than the euro-zone periphery but behind countries such as last night’s semi-finalists, France and Belgium, even if our 10-year rate is not far above the latter. It is vital for the Republic, as interest rates start to rise in the years ahead, to stay with this group. Starting to reduce our debt pile is one way to try to do this. And as the NTMA boss warns, there may never be a better time to start.