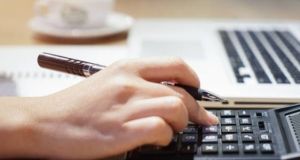 The papers, published on Tuesday, examine the income levels at which earners enter the higher income tax rate in other countries, illustrating that the €34,550 level in Ireland is relatively low. File photograph: Getty Images

An increase in the income level at which earners become liable to the higher 40 per cent income tax rate, and more tax relief for the self-employed, now look highly likely to form part of the October budget.

The annual tax strategy group papers, in which senior Government officials scope out tax possibilities for the budget, also identify possible revenue-raising measures, from increasing tax on diesel, higher carbon tax and a further increase in excise on cigarettes.

The papers, published on Tuesday, examine the income levels at which earners enter the higher income tax rate in other countries, illustrating that the €34,550 level in Ireland is relatively low. With average incomes on the rise, the group concludes that “consideration could be given to further increases to the standard rate income tax band”.

The band was increased last year and senior Ministers have indicated that it is a priority again for the 2019 budget, a move benefitting employees earning over the current level for entering the higher rate.

An earned income tax credit, to provide the self-employed with a benefit equal to the €1,650 PAYE tax credit, is also being phased in. Currently set at €1,150, it could be increased to the same level as the PAYE credit over either one of two budgets, the review papers suggest. Full equalisation would be worth €10 a week to the self-employed.

To benefit lower earners, the group says the threshold for the lower 2 per cent USC rate, currently €19,372, could be increased, meaning less income taxable at the next 4.75 per cent rate. However, the group cautions that USC reductions which take people out of the tax net entirely risk eroding the tax base. Currently people become liable for USC once they earn over €13,000 per annum.

A plan to merge the USC and PRSI over the long term is still being examined by senior officials. One proposal floated in the report is to balance USC cuts with increased PRSI in the years ahead, which would also help to support the social increase fund.

The papers calculate that further extending social insurance entitlements to the self-employed – such as illness benefits and something equivalent to jobseekers’ allowance – would require a big increase in PRSI payments by the self-employed. Average rates would need to rise from 3.4 per cent to over 18 per cent, it warns.

In an examination of corporation tax, the officials looked at the controversy over the amount of losses being carried forward, mainly in the financial sector, which still has more than €112 billion in accumulated losses since the crash. Banks are using these to avoid paying corporation tax.

However, the officials warn that reducing these could lower the value of the Government stakes in the banks, hit the capital positions of the institutions and damage the State’s reputation to investors who bought into the AIB flotation.

In a series of reports on other areas of tax and welfare spending, the papers say:

An option for Government would be to increase diesel tax to the level of petrol over five years, yielding around €71 million per annum extra and giving the transport industry time to react.

Carbon taxes on all fuels could be increased, with a rise of €5 per tonne yielding more than €100 million.

Ways to further increase tax on tobacco are examined, including the option of a minimum excise on cigarettes which would lead to a larger rise for cheaper packs.

A paper on possible welfare increases says that targeting increases at certain groups might be more efficient than generalised increases in welfare rates, with a €5 across-the-board increase costing €160 million. One option mentioned is to increase the rate of payment which social welfare recipients receive when they have children.

An increase in betting tax is examined, including raising the main rate from 1 per cent to 2 per cent and also the rate on intermediaries. Total revenue could exceed €100 million.

1 Volvo warns of scaled back car line-up if UK splits from EU rules
2 NI house builder apologises to Harry and Meghan over adverts
3 Opioid executive admits to ‘no morals’ ahead of prison term
4 US threatens retaliation against EU over proposed carbon tax
5 Little strategic thinking in election manifestos of Fine Gael and Fianna Fáil
6 Are there annual limits on inheritances or gifts to a child?
7 Who are Ireland’s 17 billionaires?
8 Cosgrave should give his speech to Web Summit’s partners in Saudi Arabia
9 South Dublin Credit Union members urged to borrow more to ensure survival
10 Q&A: Why has the pension age question suddenly become an election issue?
Real news has value SUBSCRIBE