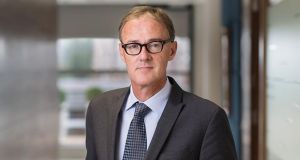 Goodbody’s managing director Roy Barrett and the firm’s other senior managers will remain with the business under the terms of the deal.

Chinese player Zhongze is buying Goodbody Stockbrokers in a deal widely reported to be worth €150 million.

The stockbroker confirmed on Tuesday that a consortium led by Zhongze is buying both Fexco’s 51 per cent stake in the business and the staff’s 49 per cent share.

Financial details remain confidential. However, sources have estimated that the deal negotiated by the pair would be worth in the region of €150 million.

State mergers watchdog the Competition and Consumer Protection Commission must approve the deal before it can go ahead.

Under its terms, Goodbody’s managing director Roy Barrett and the firm’s senior managers will remain with the business. Recent reports indicated that the takeover would not result in any staff losing their jobs.

A statement said the new owners would support Goodbody’s expansion plans in the Republic and the UK. It will also give the company’s clients access to a new corporate and institutional partnership network in China.

Mr Barrett said the deal represented an “exciting” next chapter for Goodbody.

“It also facilitates the creation of a bridge from east to west and vice-versa for institutional capital seeking opportunities in both regions,” he added.

“The transaction also confirms again how highly rated the Irish financial services sector is by international investors,” he added.

Kerry-based financial services company Fexco, founded and led by executive chairman Brian McCarthy, bought 75 per cent of Goodbody seven years ago from AIB in a deal worth €24 million.

However, management in the stockbroking and wealth-management company subsequently doubled their combined holding to 49 per cent under an incentive scheme tied to the original deal.