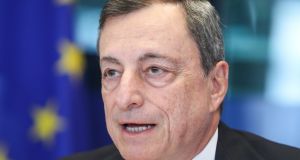 Mario Draghi was appearing before the committee as chairman of the European Systemic Risk Board.

European Central Bank chief Mario Draghi has linked the current spike in Irish property prices to “the search for yield by international investors”.

Mr Draghi said the real estate market in the Republic and several other EU states was “overstretched” and vulnerable to “repricing”.

He was responding to a question by Sinn Féin MEP Matt Carthy about the risks posed to the Irish economy from an overheated property market at a meeting of the European Parliament’s economic and monetary affairs committee.

Mr Draghi identified the search for yield by overseas investors as one of the chief drivers of price here.

The resulting rise in property prices, he said, made the market vulnerable to repricing and sudden changes in risk premia.

The ECB president was appearing before the committee as chairman of the European Systemic Risk Board, effectively the ECB’s financial risk committee.

He said rising prices in the Republic, both residential and commercial, were in part being fuelled by cross-border financing and non-banks, and that it would be important to investigate whether new macro-prudential instruments should be introduced for non-banks, especially in relation to their commercial real estate exposures.

Mr Carthy had tabled a question about the Irish property market, claiming international finance was fuelling another housing bubble and pricing thousands of people out of the market.

He highlighted several recent warnings about the Irish property market by the European Commission, the International Monetary Fund, and the the Organisation for Economic Cooperation and Development (OECD).