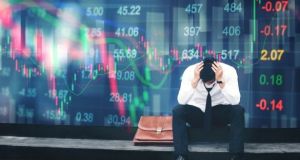 Household incomes in the Republic have grown rapidly by international standards over the past 30 years, more than doubling since 1987, a study by the Economic and Social Research Institute (ESRI) has shown. This is despite the recession here after the 2008 crash.

The research, published to coincide with the ESRI’s annual Budget Perspectives conference in Dublin today, also revealed that Ireland has largely bucked the trend towards income inequality seen in other countries such as the UK and the US.

The study shows that real incomes here, measured by national income per capita and household income surveys over the period, rose by up to 150 per cent between 1987 and 2014. This compares with an international average for advanced economies of about 50 per cent.

The report, entitled Income Growth and Income Distribution in Ireland, noted that the rapid growth in incomes here would have been even stronger but for the 2008 crash, which caused incomes to decline for several years in the immediate aftermath.

“As a result low, middle and high-income households in Ireland have all seen substantial growth in their incomes – unlike the slow and unequal growth seen in the UK and the US,” it said.

“Ireland, once towards the high end of the inequality spectrum for an advanced country, is now close to the OECD average for income inequality.”

The rise in income equality in several western countries, including the US and the UK, and the growing gap between the rich and poor, as chronicled by French economist Thomas Piketty in his book Capital in the Twenty-First Century, has sparked international debate.

It has been linked to the rise of Donald Trump in the US and the UK’s decision to leave the EU.

The ESRI’s study found that income inequality here rose between 2008 and 2013 when the State was in the grip of the financial crisis, but has since returned to its long-run average.

The report noted that while market income inequality in the Republic is high the redistributive nature of the tax and welfare system offset much of this differential.

It said between 1987 and 2014, discretionary changes in tax and welfare policy led to gains that were greatest among those with incomes in the lowest 20 per cent of households.

“Welfare payment rates have risen at least in line with wage growth over the 1987 to 2014 period, ensuring that growth in low incomes keeps pace with broader income growth,” the report’s author Tim Callan said.

“Changes to tax and welfare over and above wage indexation have led to gains which were greatest for those with the lowest incomes. This has helped to ensure that ‘fiscal drag’ has not reduced the incomes of those in employment, and has helped to provide a floor to incomes for those dependent on welfare which has at least kept pace with general income growth,” he added.