Does the CSO have another leprechaun on the loose? 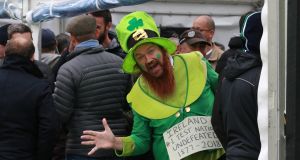 The Central Statistics Office (CSO) has moved to allay fears that there’s another leprechaun lurking in the national accounts.

The figures for 2017, due out next Thursday, were meant to be published in June but were delayed by three weeks, prompting concern that the agency is grappling with another distortion.

Perhaps not as big as the one that triggered our jet-fuelled 26 per cent growth rate of 2015, which made China’s 7 per cent look pedestrian, but nonetheless one that will be hard to explain or embarassing for political figures to stand over. Nobel Prize-winning economist Paul Krugman famously dubbed our 2015 figures as a case of “leprechaun economics”.

There is nothing untimely about the results, a CSO spokeswoman assured The Irish Times. “The upcoming results will include the revisions routinely incorporated at the time of the annual results due to the availability of more comprehensive and detailed data,” she said.

The fact that gross domestic product (GDP), as a measure of economic activity, has become something of a debunked entity in an era of complex global supply chains, shifting intellectual property assets and agressive tax planning is not the CSO’s fault.

If anything, the agency is leading the way in trying to better account for these issues. The flak Ireland gets for its leprechaun economics is perhaps more to do with the aggressive corporate tax planning that we’ve facilitated than anything else.

However, Irish people are not 50 per cent better off as a result – far from it. Employment, the best measure of Ireland’s recovery, is only now returning to pre-crash levels.

The statistical noise in the Irish GDP figures is unlikely to go away, which is why the CSO is now focusing on GNI*, a measure of gross national income. It strips out the profits of redomiciled companies, and better accounts for the relocation of intellectual property and aircraft leasing assets here.

The new measure shrinks the size of the Irish economy by about one-third, and is probably a better reflection of real activity.