How much will the trade war cost a typical American family? About $60 (so far) 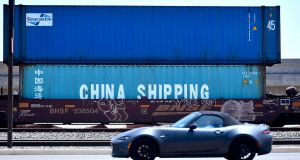 The US-China trade war has begun, and it arrives with potentially far-reaching consequences for international relations and the global economy. But what about the average US household? What is it going to cost them?

For the more than $80 billion (€68.7 billion) in tariffs the US has placed on washing machines and solar energy cells and panels; on most steel and aluminium imports; and on hundreds of products made in China, the short answer is $60 (€51) a year per household. That’s about one-tenth of 1 per cent of a typical household’s income.

This does not include the potential impact of taxes on $200 billion worth of Chinese imports that the Trump administration enumerated this week; the earliest those could go into effect would be September. Including those tariffs would bring the total annual costs for the average American family to $127.

The household impact numbers are based on analysis of government data by Kirill Borusyak, a postdoctoral associate at Princeton University, and Xavier Jaravel, an economics professor at the London School of Economics. They should be thought of as rough estimates, as they do not account for the full range of ways businesses and consumers will react; they assume, for example, that companies pass the entire cost of tariffs on to consumers rather than taking a hit to profit margins.

The numbers also don’t include the costs to some Americans in their roles as producers, as opposed to consumers – people who could lose their jobs or see lower incomes because other countries retaliate by taxing US products. But the data gives a sense of how the tariffs are likely to affect the typical household budget and increase consumer prices. The magnitude is small for now, but prices could rise substantially if a tit-for-tat escalation drives the total of affected goods toward or beyond $1 trillion.

For the tariffs already in effect, here’s how the $60 per average household breaks down: American households will pay about $7 a year extra for the washing because of the newly taxed Chinese goods that went into effect last week.

A trade war can affect the economy in several ways, however. A tariff on a product from China might raise prices for that product in other countries. If Chinese suppliers are facing a tariff from the US, suppliers in the US and other countries might feel as if they have a little room to raise their prices as well.

Economists aren’t sure exactly how big this effect is, but Katheryn Russ, a professor of trade at the University of California, Davis, says it might add a further $20 to the estimate. It’s also important to remember that these are average costs. Households that buy expensive items like cars and washing machines this year will pay more because of the tariffs than households that don’t. “The issue with the tariffs is that they’re really distorting,” Russ said. “They don’t fall evenly across the population, and they hit us in random ways.”

One reason these numbers are relatively small is that the US doesn’t really import that much relative to the size of its economy. Even though it imported nearly $2.2 trillion of goods in 2015, US imports were only 12 per cent of GDP, the lowest percentage among advanced nations. Of that, only about 3 per cent of US imports (based on 2015 figures) are subject to these initial waves of taxes.

Richer households tend to spend more money overall, particularly on high-end electronics that are covered by the tariffs.

The trade war poses much more substantive risks to people whose livelihoods are tied to industries directly affected. That includes both industries that face more expensive raw materials because of tariffs, like a nail manufacturer grappling with higher steel prices, and those that are subject to retaliation, such as soybean farmers who will see lower incomes because of Chinese tariffs on their products.

Economists also point out that these tariffs are to some degree rolling back some of the gains families saw from the tax cut the Trump administration passed seven months ago. “You’re cutting taxes with the tax reform and then you’re slapping them back on with the tariffs,” Russ said. “In that context they don’t look trivial, especially for low- to middle-income households.” – The New York Times News Service