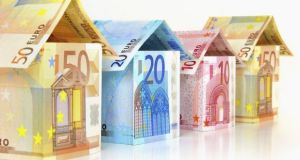 The average disposable income of Irish households stood at €53,118 in 2019

The average disposable income of Irish households rose by nearly 30 per cent between the financial crisis and last year, according to the Central Statistics Office (CSO).

The agency’s latest Survey on Income and Living Conditions shows the average after-tax income of households here stood at €53,118 in 2019.

The CSO figures reflect the rapid growth in overall employment between 2012 and 2019 rather than direct wage increases.

However, they predate the current coronavirus crisis, which has resulted in a spike in unemployment and a compression in household income.

Households with three or more people at work had the highest nominal median household disposable income (€95,613) last year, compared with €24,173 for households with no one at work.

The survey also revealed a strong correlation between disposable income and education. Where the head of household had an educational attainment of primary level or below, the nominal median household disposable income was €26,527, compared with €66,811 for those with a third-level degree or above.

The survey also provided an insight into poverty rates here.

Those classified as at risk of poverty – in other words the percentage whose income was less than 60 per cent of the national median – was 12.8 per cent last year, down from 14 per cent in 2018.

Those most at risk of poverty were people who were not at work due to illness or disability (37.5 per cent) and those who were unemployed (35.4 per cent).

This compares with an “at risk of poverty” rate of 4.6 per cent for those who described their principal economic status as “at work”.

The consistent poverty rate, which includes people defined as being both at risk of poverty and also experiencing enforced deprivation, was 5.5 per cent, compared with 5.6 per cent in 2018. The change was not considered statistically significant by the CSO.

Seán Healy, director of Social Justice Ireland, said the figures indicated that 637,107 people are living in poverty in Ireland. “Of this number, around 193,681 are children under the age of 18,” he said.

“Despite wage growth, increased employment and very high rates of economic growth last year, these figures show that a significant proportion of the population is still living in very difficult circumstances,” he said. “We expect that the impact of Covid-19 will simply make this situation worse.”