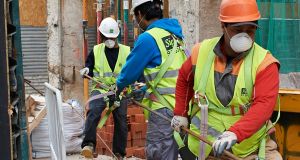 The Covid-19 pandemic has had a dramatic effect on employment, consumer spending and the wider eocnomy, new figures from the Central Statistics Office show. Photograph: Carlos Alvarez/Getty Images

The Covid-19 pandemic has had a dramatic effect on employment, consumer spending and the wider economy, new figures from the Central Statistics Office (CSO) show.

The agency’s latest 2020 yearbook reveals the number of people classified as being “away from work”, in other words employed but not working, rose by more than 400,000 during the initial lockdown.

This does not include those officially classified as unemployed or those on the Government’s wage subsidy scheme.

Since the beginning of the Covid-19 pandemic, just under half of the population aged 15 years and over had seen their employment situation affected in terms of loss of employment, temporary layoff, change in work hours, remote working from home or change in the business model to online/takeaway.

Employment impacts have been felt most particularly in the 35-44 age group, where two-thirds report employment effects.

Some 17.3 per cent of respondents were either very or extremely concerned about household stress from confinement as a result of the restrictions in April.

During the first week of March, before Covid-19 restrictions were put in place, just under €1.5 billion was spent on debit and credit cards. By April 16th, that had slumped 41.2 per cent to €875 million.

However, the lifting of restrictions triggered a rebound in spending and, by the week ending August 31st, new spending on debit and credit cards had increased significantly to €1.54 billion.

The business impact of Covid-19 is also detailed via a survey of 3,000 enterprises. More than three-quarters (76 per cent) reported trading in some capacity on April 19th and May 3rd with just under 24 per cent having ceased trading either temporarily or permanently.

As society and the economy began to reopen, more businesses reported trading, with 89.4 per cent open on May 31st and 92.1 per cent back up and running on June 28th.